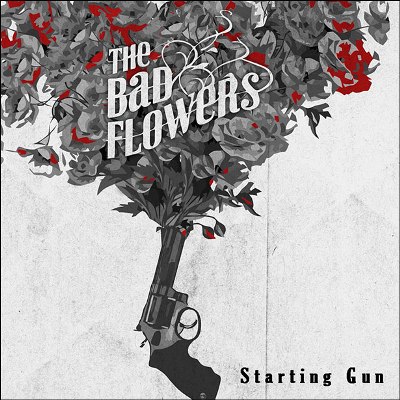 Midlands based hard rock band The Bad Flowers have their debut studio album Starting Gun lined up for a release date of Friday 16th February 2018.

Listed as “ones to watch” on Planet Rock Radio where their single ‘Thunder Child’ gained heavy airplay, eager beavers can take advantage of the pre-sale at the band’s website as of 10th November by clicking here. There will be limited edition signed red vinyl editions of the album, exclusive t-shirts only available for pre-orders and hand drawn, plus signed, and numbered personalised drum heads.

Starting Gun was recorded at Vigo Studios near The Bad Flowers’ hometown of Cannock, as they wanted to make a record that sounded like their roots. It also gave them the opportunity to work with long-time friend producer Adam Beddow, known for his work with Diamond Head.

Following their recent tour supporting The Picturehooks, The Bad Flowers have only two more scheduled dates announced for this year, 21st November at The Jazz Café, in London, where they’ll be supporting Blues Pills at Planet Rock’s Christmas party and headlining themselves at the Leicester Soundhouse  on Friday 24th November. Thereafter, in the New Year they’ll be promoting Starting Gun when they go out on tour again alongside Stone Broken and Jared James Nichols, as previously reported here at Ramzine.