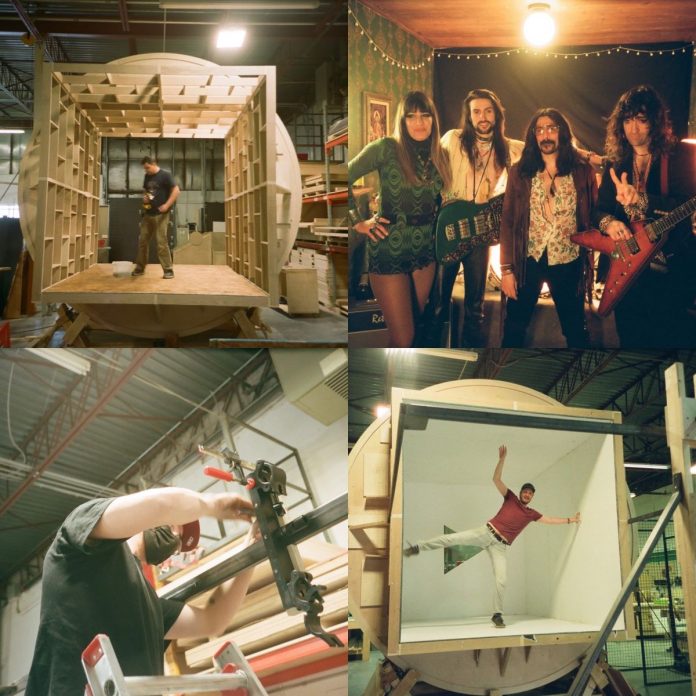 Canadian rock and rollers The Damn Truth’s current single ‘This Is Who We Are Now’ has proved a rock radio hit, and for those not yet exposed to them over the airwaves they’ve released a brand-new video to accompany it, that’s pretty unique!

The gravity-defying video utilises state-of-the-art technology that sees the band performing the single upside down in a 360-degree rotating custom-built room.

For those smooth listeners old enough to recall Lionel Richie’s ‘Dancing On The Ceiling’ take your thoughts back to bedsit land and some suspicious substances that don’t hinder the song’s raucous celebrative rock sounds.

That, or simply watch the video right here at RAMzine.

“I don’t know remember how the director said it,” reflected The Damn Truth’s drummer Dave Traina, “but he just basically said, “Guys, how comfortable are you performing upside down?”

“They built an 8 x 10 circus ride just for us,” explained bassist PY Letellier. “We call it The Damn Truth cube.”

The visually compelling video was created by I/O Studio, and you can get an insight into how it was made by accessing the behind-the-scenes footage about the making of the video by clicking here or again watching it right here at RAMzine.

“All members of the band were injured in the making of this video,” joked lead singer Lee-La Baum… “and they loved every minute of it.”

‘This Is Who We Are Now’ is taken from the band’s Bob Rock-produced album Now or Nowhere that’s available from here now streaming on Spotify.

On Wednesday 9th June The Damn Truth perform a virtual album livestream concert. You can find full details about that at RAMzine here alongside information on their forthcoming live dates as guests on King King’s UK tour.