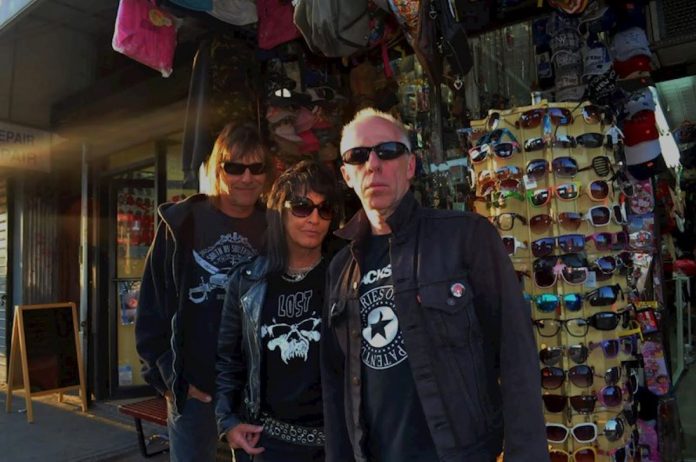 Formed in Lansing, Michigan in 1968, The Dogs started as proto-punk band playing alongside The Stooges, MC5, and KISS before eventually moving to Los Angeles in 1976 and joining the ranks of the emerging west coast punk scene.

The trio appeared on the Killed By Death compilation and their notorious ‘Slash Your Face’ 7” single cemented the band’s “way-ahead-of-its-time” status. After a breakup, the band reformed and release a compilation album in 2000 and have been going strong ever since.

‘Under The Coast’  was co-written with and features fellow rock ‘n’ roller Frank Meyer (The Streetwalkin’ Cheetahs, James Williamson & The Pink Hearts) on guest vocals and guitar. The socially conscious, topical song deals with the chaos and dissonance of modern times.

“Frank and I go way back,” said The Dogs’ front man Loren Molinare. “His band The Streetwalkin’ Cheetahs and The Dogshave been in the trenches of the rock ‘n’ roll wars for years together, playing cutthroat gigs side by side. We had always talked about collaborating on a song one day. T

“hen right at the beginning of the pandemic, Frank texted me and asked if I was recording at home at all. I told him I just had a few riffs in my phone, but I’d send them over. Next thing I knew he took them into GarageBand and wrote a full realised song around all my parts! And it was a really strong song.”

“Loren sent me these killer riffs that had a punk thing going on but also had this power-pop meets surf rock twang to ‘em,” added Meyer, “And since society was just starting to fall apart with the pandemic and riots, I started writing about that. But I wanted the vibe to be kind of happy like ‘Hey, the world’s falling apart around us and the apocalypse is near, so let’s head to the beach and surf!’ Sort of a west coast punk rock take on Prince’s ‘1999’ in a way.”

Molinare then presented the demo to The Dogs’ other members – Bassist Mary Kay and drummer Tony Matteucci – to work it up and the trio then all gathered at Pawnshop Studios with producer Richard Duguay to cut the tracks, sending Meyer the mixes to record his vocals from his home studio since Southern California was on lockdown at the time.

Kay said of the song, “It’s a strange time and Loren and Frank did a great job of capturing the tension and hypocrisy in the air these days.” She also inspired another idea.

“As soon as Loren mentioned doing a video, I had this idea of project images over the band members, sort of like a ‘60s go-go dancing’ flick meets David Lynch-style art film, ” aid the front man. “The images needed to move along fast and match the song too, so they needed to reference both the SoCal happy-sunny beach vibe plus the violent underbelly of modern city life and the politics that keep us all paranoid. So basically, it’s a sunshine apocalypse!”

Loren subsequently booked a soundstage to shoot the video only to find he tested positive for COVID-19 and had to go into a 14-day self-isolation. Fortunately Meyer also has a film directing background and a way was found to shoot the video under restrictions.

You can steam/buy ‘Under The Coast’  here and watch the video for it right here at RAMzine. Die Laughing Records will also issue ‘Under The Coast’ on vinyl later this year as the B-side to The Dogs’ previous digi-single ‘Welcome to the Revolution‘.