Thundermother, Black & Gold All Over 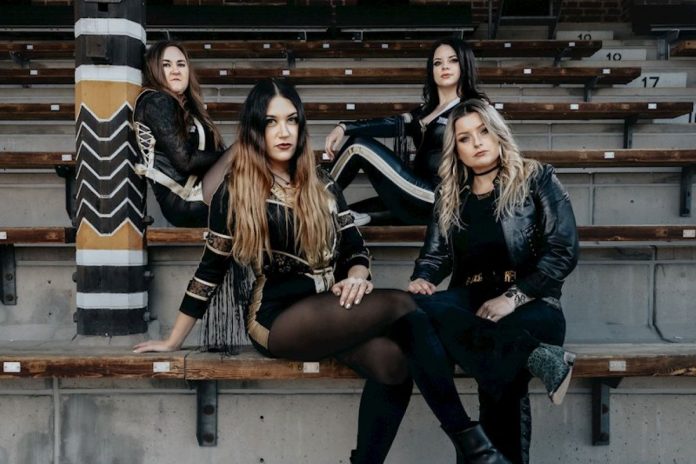 Following their 2020 chart-breaking album Heat Wave, the all-female Swedish rock band Thundermother will release their hotly anticipated, new album, Black And Gold, on 19th August through AFM Records, and ahead of that comes the title track as their latest single.

Vocalist Guernica Mancini said of it: “The one song that we hope to unite all our fans under, the colors black and gold are ours now and we wear it with pride!

“This tribe is for everyone, let’s lead the way with love, unity and passion and why not look amazing while doing that too!”

You can check out the video here at RAMzine – It’s available on all digital platforms at here.

Following the album release, later in the year they’ll out on tour in the USA playing with Whitesnake and The Scorpions.

‘Black & Gold’ isn’t the first single taken from the album. Out previously, was the full-throttled vocal power ballad of ‘Hot Mess’ – You are advised to check out the lyric video for it here at RAMzine, then purchase/stream it by clicking here.

“‘Hot Mess‘ is about finding that one person that really sees you and accepts you for who you are, flaws and all,” singer Guernica Mancini commented.

“About the video, we couldn’t be more happy!” she added, it having been produced by drummer Emlee Johansson. ” Emlee has really been able to capture the emotions of the song in this beautifully executed video, from the melancholy of being away from someone you love and wanting to find that love and then to finally having it. Emlee’s talent goes beyond and we are so grateful that we are fortunate enough to have such a multi-talented, creative force in our tribe. We love this video, and we love her!!

Johnasson herself added: “To my band, thank you for believing in me as a video director/producer and trusting me with my vision. To my sisters, thank you for lending me the equipment necessary to make this video happen and last but not least, thank you Petter for always being my rock, coach and problem solver, without your support I would have lost my mind!“

That was the third single released from the upcoming album. First out the box was ‘Watch Out’, and then the band premiered a brand-new music video for ‘I Don’t Know You’.

Guitarist Filippa Nässil said of the ‘I Don’t Know You’ single, “Everyone has met someone in their lives that brings out the worst in you. This is our cheeky way to tell that story. We hope and believe that this song could be the theme of the summer 2022”

New album Black And Gold was recorded at Bagpipe Studios, Stockholm, and was mixed and mastered by Søren Andersen at Medley Studios in Copenhagen. Coming out on vinyl, CD and digital formats on 19th August, and available for pre-sale here.

You can also check out the video for ‘Watch Out’, here at RAMzine, but you should note it contains explicit lyrics.

With four studio albums to date and countless, frenetically acclaimed live shows under their belt – not even the Corona pandemic could completely slow the band down and they played concerts from such as the roof of a fire truck, Thundermother were born for the stage. Now, The Scorpions and Whitesnake have invited the Swedes as special guests for their North American Rock Believer stadium tour 2022!

“We are honoured to accompany the legends Scorpions and Whitesnake,” said the band. “Our first tour in North America. We grew up with their music and having the chance to spread our love of rock with them is unreal. We are stoked!!”

Jochen Richert, managing director of AFM/Soulfood said: “After getting Thundermother to the next level in Europe, no actually the next level but one, it’s time to conquer the USA. A stadium tour with The Scorpions and Whitesnake in the summer will be a first, important step. Just like in Europe, we will support this tour massively in terms of promotion and marketing. Working with the ladies is a lot of fun, everything runs highly professional and the whole team is maximally motivated. That’s exactly how it has to be.”

You can pre-order Black And Gold here.