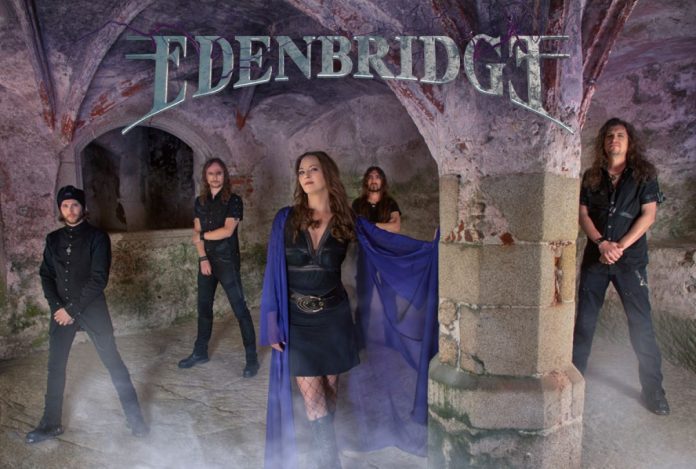 Austrian symphonic metal band Edenbridge is gearing up for the release of their eleventh studio album, having recently signed a worldwide deal with AFM Records.

The new album will be out on 26th August, and titled Shangri-La – Ahead of that comes their latest single and music video ‘The Road To Shangri-La‘.

Vocalist Sabine Edelsbacher said of the song’s them: “Destruction and separation, or healing and conjointness. The compass shows the confusion, but the closely guarded mysteries in the treasure chest can be found by everybody any time. It is our decision.”

You can obtain the single here and check out the video for it right here at RAMzine.

Shangri-La, was recorded at the Farpoint Station Studio, mixed by Karl Groom and was produced by guitarist Lanvall. “Instead of going on a European tour in spring 2020, it was a matter of flipping on our creative switch and channelling those intense energies into a transformative song writing process for the new album,“ he said.

The cover art was created by United Arab Emirates artist, Muhammad K. Nazia, and features a pictorial representation of Shangri-La embodied as a synonym for paradise. The term was first mentioned in the novel Lost Horizon by James Hilton. It is described as a mystical place where people live in peace and harmony. However, the story itself is based on the ancient Far Eastern legend of Shambala depicted in long-preserved Buddhist scriptures.

The legend depicts a paradise that is to become accessible again only when humankind is ready for it and only when a few have the spiritual maturity to understand and preserve the teachings.

Edelsbacher revealed: “For me, Shangri-La is a wellspring of wisdom, a deeply secluded spiritual centre and a realm of retreat that casts a magical allure over we humans. And there is a reason why it is so meaningfully said: ‘You do not enter paradise with your feet, but with your heart’.”

Previous to this latest single, Edenbridge released ‘Somewhere Else But Here‘ about which Edelsbacher said: “‘Somewhere Else But Here’ is about our phantasy, that takes us on a journey into a world we would like be different. In some extent, we also use it to write a part of our book of life, which lies at the bottom of the lake and life leafs through it.

You can obtain that single here and catch the lyric video for it right here at RAMzine.

Tracks featured on the record are: ‘At First Light’, ‘The Call Of Eden’, ‘Hall Of Shame’, ‘Savage Land – featuring NDR Radio Orchestra flutist Daniel Tomann-Eickhoff’, ‘Somewhere Else But Here’, ‘Freedom Is A Roof Made Of Stars’, ‘Arcadia (The Great Escape)’, ‘The Road To Shangri-La’, ‘The Bonding (Part 2) – featuring Erik Martensson (Eclipse, W.E.T.)’, ‘I. The Bonding Overture’, ‘II. Alpha and Omega, ‘III. The Eleventh Hour’, ‘IV: Round And Round‘ & ‘V. The Timeless Now – Finale’.

“It is a pleasure to finally join the roster of AFM Records,” said Edenbridge guitarist and songwriter Lanvall. “We have been in touch twice before in the last 15 years, but now it was the right time to join forces. We believe we both can push things to new boundaries with this young dynamic great team!”

Nils Wasko, CEO of AFM Records, commented on Edenbridge that they are: “Currently one of the hottest symphonic metal acts out there. This energy and drive fits perfectly with the quintessence of AFM Records. We are looking forward to taking the band to the next level with full force!”

Formed in 1998, Edenbride is one of the most style-defining bands of their genre, beginning with their debut album Sunrise In Eden in 2000.

With ten more successful studio records to date, the band continually expands their musical expression from album to album without abandoning their trademarks; a sophisticated range of compositions along with an intoxicating and bombastic sound atmosphere.