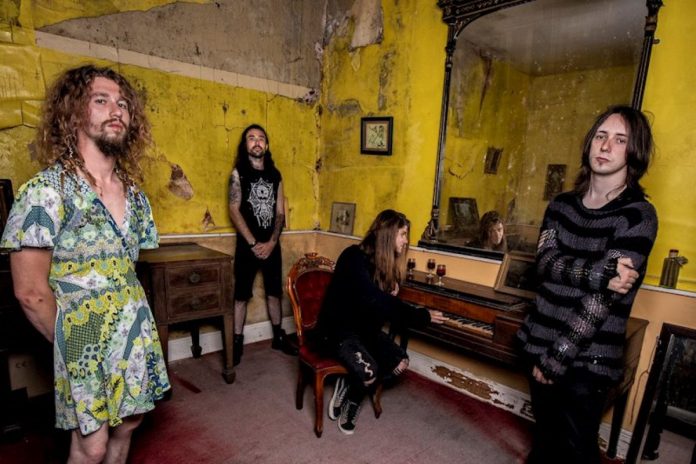 Leading the charge in a new breed of Irish hard rock, is a band called Vendetta Love, and they have a new single out called ‘Blackened Hands‘, that pre-empts an EP titled Speak Now that’s set for release 24th September.

Vendetta Love come from Portlaoise, that’s referred to as “the midlands of Ireland” but their influences are from across the Atlantic, combining the anthemic brooding darkness of Seattle grunge, with the danger and excitement of LA’s Sunset Strip.

A four piece, their influences range from Alice In Chains to Guns N’ Roses, and Stone Temple Pilots.

News of their freshly recorded EP, Speak Now, has caught the attention of tastemakers from the underground Irish scene, who await its release this coming September with anticipation.

Band member Namaste revealed the following about the new EP: “We chose Speak Now as a title cos it’s pretty representative of where we’re at as a band. We feel like it’s our time to speak, to give our music to the world. It’s taken from a line in ‘What’s in the Blood?: ‘Speak now or forever hold your f**kin’ tongue.’  And that’s pretty much what we said to ourselves.

“It’s almost become a mantra for us. The writing for this EP happened over quite a long time, to be fair. ‘Follow Me Down’ and ‘What’s In The Blood’ are songs we’ve had since pretty early on.

“We had a relatively large pool of songs to pick from too, so actually deciding what we wanted to put on the EP was a real ball breaker. I don’t know exactly if there’s a concept to it, but there’s definitely a theme of colours. Greens, dark reds, and purples. I don’t know if that makes any sense, but we’ve all kinda said it, between ourselves.

“Like a bunch of weird, colour gremlins. We recorded it over four days in Dublin’s Trackmix Studio. Getting to hear those songs grow track by track over the few days was almost like watching your kid grow. We can’t wait for everyone else to hear it.”

The EP features the following tracks: ‘Follow Me Down’, ‘Witches & Thieves’, ‘Blackened Hands’, ‘Lost‘ and ‘What’s In The Blood‘.

You can listen/buy new single ‘Blackened Hands’ here and previous single ‘Witches & Thieves’ here and watch the official videos to both right here at RAMzine.

They also have a UK tour lined up for 2022, as guests to Harsh – See below for details.