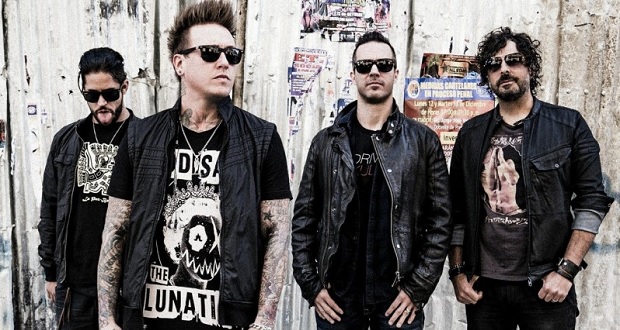 As of today Papa Roach will be officially back to the UK for some unmissable live shows.

They’ve recently released their new album ‘Crooked Teeth’ via Eleven Seven Music and have launched a video for their track ‘Periscope’ featuring American singer -songwriter Skylar Grey which you can watch here:

“‘Periscope’ is inspired by the realization that sometimes within a relationship you might not be worth being loved or that the other person may not be worth your love, and the struggle within that— how much effort it takes to make things work,” says Papa Roach lead vocalist Jacoby Shaddix. “One part that I think is really meaningful in the video is when Skylar and I are in the shot at the same time, yet we’re not engaging with each other. It represents the ‘disconnection’ with two people, which is very much what the lyrics describe.” Grey adds, “You are loving someone from a distance, not able to reach them.”

Crooked Teeth is their ninth studio album and it has already scored them their 4th consecutive Top 20 entry in the UK.

Papa Roach’s last visit to the UK saw them celebrate the 15th anniversary of their generation defining album Infest by playing it in full to a crammed London’s Roundhouse.

Two years later and this eagerly awaited comeback is finally about to happen. Singer Jacoby Shaddix says: “We’re really excited to get back to the UK after such a long time. Every time we play, the audience keeps getting bigger and more passionate each time. We can’t wait to play this new music live.”

Find a full list of their UK tour dates below:

Previous: WIN: Guest List for Orden Ogan/Rhapsody of Fire shows this November!
Next: Body Count unleash new video ‘This Is Why We Ride’