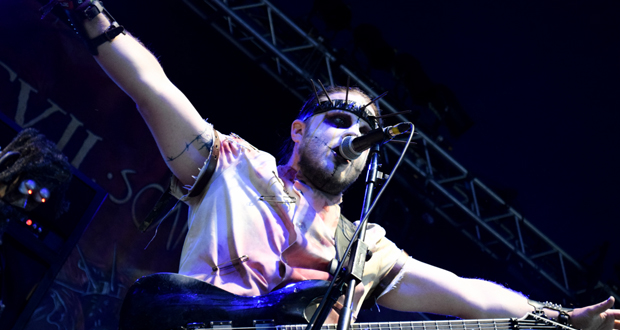 We caught Evil Scarecrow at Download Festival 2015, see the photo set below.

I had heard rumours about these guys, and when I saw a festival goer dressed in a robot suit crafted out of empty beer cans, Carlsberg boxes and electrical tape, I knew I was in for an interesting show. The first thing that struck me was their image, are these guys serious?! No, they are not. But, damn, were they good! Frontman, Dr. Rabid Hell, is hilarious; admitting that they were low budget and could not afford fancy fireworks, he beseeched the audience of the Maverick stage to grab anything they could find off the floor, from cups and cans to grass and “shit”, and, on the count of three, to throw it into the air – of course the crowd willingly obliged. For “Robototron”, they had the whole crowd dancing like robots, a surreal but thoroughly entertaining performance! (It has to be seen to be believed, so search “Robototron” on YouTube.)