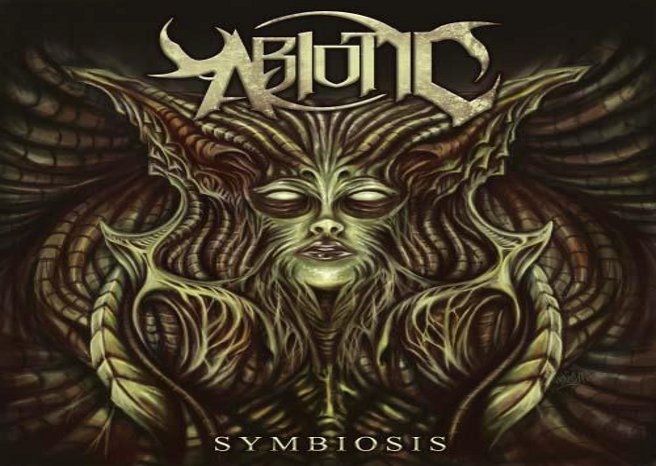 The album starts with Metamorphilia and this is a taster intro that will lead you onto Vermosapien. This track introduces the main concept of the album, and the creed of Abiotic : that human beings being are disgusting creatures i.e. vermin, and therefore a danger to the universe. Flamboyant elongated guitars fluster around grandiose vocals and a purulent pace is relentless and greedy in its efforts. This song is a fast attack, a fierce and ear-damaging assault on your cortex.

A Universal Plague will peel your rind. The shear acidity of the vocals, when combined with the lacerating guitars, will chisel into your shell, leaving you a pithy mess. The jazzy guitar segment around one third through marks this track as rather more special than you expected. After that interval, you will be weakened by a primeval alarm note. This shrill note will delve deep into your unconscious mind, altering your state of being.

To Burgeon and Languish will flake the scales from your leathery skin. It is that abrasive. Cones of immense guitar sounds flume up out of the polluting smoke created by the vocals. At times, great fiery stalks of power-guitar rise like magnificent mushrooms from the primordial foetid bloom below.

Hegira (named after a 1979 science fiction creation) has classical inspirations – yes you will be able to detect Hungarian Dances (Brahms). Then, monolithic slabs of bass are man-handled into position by Alex Vazquez. These are then intricately etched by Johnathan Matos on lead guitar. An ear-aching, grunge-filled flurry of riffs then encompasses the whole piece, taking it to a grave new place. Daunting and mendacious drums from Andres Hurtado twist and turn in the final moments. Leaving you distraught.

Conquest of Gliese (Gliese stars are those situated within 25 parsecs of the Earth) is a screaming, nagging mutant of a song. Frustrating and ratty. And The Singe is a scalding, scimitar-sharp piece. Vocals are deformed and stretched – the torsion creates an unhealthy sense of panic. This song is a brutal devastation of beastly proportions.

‘Symbiosis’ is a colossus. It is a salivating brute of a recording. Fear not, though, because it can be tamed. This is an album of complex delights, garnished with moments of great lucidity. So take each track as it comes, and take it in stages. Easy does it.