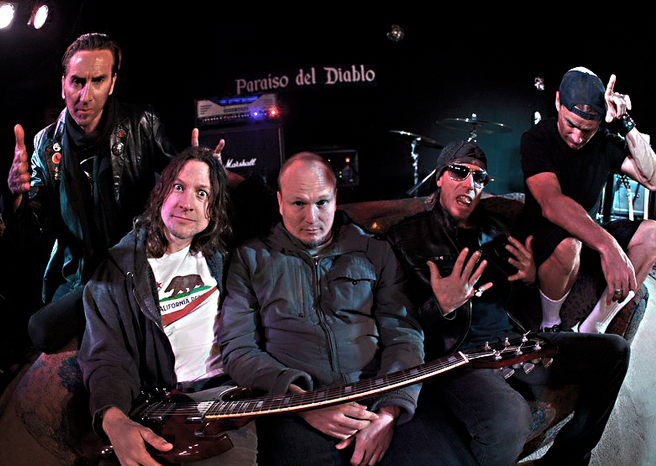 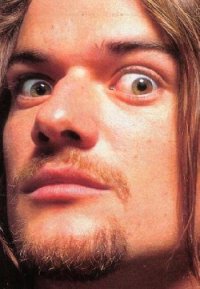 Ugly Kid Joe are a rock band that formed in California in 1990. Breaking up in 1997, the band reformed in 2010 and have been touring extensively, as releasing a new EP Stairway To Hell. RAMzine sat down to speak with their lead vocalist, Whitfield Crane.

Team RAM: Stairway to Hell was released a few months ago, what’s the reaction been like from fans?

Team RAM: Do any tracks stand out to you on that EP?

Whitfield: “No One Survives, Devil’s Paradise, I’m Alright. The sleeper would be Another Beer I would say. Right now we’ve just released I’m Alright, and we’ve shot a video for it. It’s amazing! It’s super-cool, a lot of people came together to help manifest it, real film directors working way below their pay grade you know? It’ll be done in like 12 hours done, their colour correcting it. Which is amazing to me, a man who knows very little, because they send me a version of the video and I’m like “that’s amazing!” and they go, “no man, this isn’t it yet.” Either way I’m stoked. This morning they sent me a version closer to what they wanted, and it’s amazing, just like proper film. It’s cool, we’re all in house, you know? It’s us against the world. There’s no label, I mean, I’m the label, I’m the management.”

Team RAM: Yeah, what’s that like, being able to manage yourself?

Whitfield: “It would have been undoable twenty years ago. And fair enough. I wouldn’t have been present to do it. It feels oddly familiar for me, it’s exciting. I’d be the first to say I don’t know what I’m doing, which I think probably liberates me to a lot of different things, admitting you don’t know, what does anybody really know? So that said, it’s infinite what can go down. As you well know, the music industry is over, as it was, and we had a great run with that, we did well for that model and not a lotta people got to do that. And now that’s over, so anything can happen. We didn’t know what would happen when we got back together after fifteen years. Would anybody give a fuck? We didn’t know. We went and played a bunch of shows, started here in London on June 6th, you know a club show that sold out a month or two in advance, we couldn’t believe it. Played Download BAM! Huge Response!”

Team RAM: You played a lot of festivals this Summer right?

Whitfield: “Oh we had a whole bunch.”

Team RAM: Any of them stand out?

Whitfield: “Oh yeah! And July 8th we played Sofia in Bulgaria, and that fucking stood out too. I mean every show is amazing to me, for different reasons, I’d never been to Prague. I’d never been to Israel, or Bulgaria, or Romania, or Serbia. As far as crazy crowd experience, Vienna was gnarly. The whole thing was great, we did 33 days, we played 24 shows in 15 countries. And it was awesome.”

Team Ram: Now obviously you guys had a long break?

Team RAM: Did that change the approach to how you wrote music together, or was it just like jumping back in?

Whitfield: “Jumping back in, but kinda with more… everyone’s skill level had evolved. Well Dave Foreman the guitar player is a sick fucking producer, he’s baddass at what he does. So imagine – getting a producer is always really, because they’re gonna be the fifth or sixth member of the band, and that can go south or it can take you straight to heaven. He’s just out silly friend, you can just call him and say “hey, what’s up?” And in this case he called us and said (Puts on a pretty damn good Southern American accent) “Man I know how to proof this shit, let’s go do this!” For me, I’ve evolved as a vocalist, as far as I have less fear in the studio, I’ve sung stylistically in a couple of different bands. So I’ve got a lot to draw from, you know what I’m saying? I’m closer to confidence then I was before. When I was a kid I was just making it off whatever raw talent I had and it just happened to kinda work, which was cool. And now you can hear it in my tones. I’ve never taken a singing lesson, I don’t warm up before shows. Whatever I am as a vocalist has evolved.”

Team RAM: Well you were sounding pretty sharp on Stairway To Hell.

Whitfield: “Oh yeah man it’s fucking dope, I love it.  And every song has a different vocal character.”

Team RAM: You spoke about other bands, can I ask if there’s a future for Another Animal?

Whitfield: “You know what, that band will probably always make music but Godsmack is their day job, that’s how they’ll always make their money. We’ll probably always go make music, but will they ever go get in a van and sweat it out on tour, I doubt it. I’m gonna go make an acoustic record with one of the guys from Another Animal, his names Lee Richards, and John Kosco, who’s a great blues singer. So we’re going to do an acoustic record, with acoustic guitars and three proper lead singers, like Beach Boys.”

Whitfield: “Yeah I don’t think it’s been done in a long time, that level of harmony. So I’m gonna go do that, which is kinda part of Another Animal, you know Lee Richards is in that band, so we’ll do that in the first couple months of the new year. You know, if the world doesn’t leave. On uh… what is it December 22nd? October?”

Whitfield: “If we make it past the apocalypse, which by its definition is the unveiling of the truth. I’m convinced we’re all in one big band, anybody who’s still alive and still here and still in love with music, we all go jam  together. Sometimes you call it Another Animal, sometimes it’s called Ugly Kid Joe, which is you know, just names. Yeah, we’ll make music again.”

Team RAM: Looking forward to it?

Team RAM: Have you met him yet?

Whitfield: “Never once. I’m a super-fan, I’m excited, he’s one of the old-school masters. It’s only he and AC/DC I can think of that have eluded me. Everyone else I’ve jammed with, and toured with and whatever. So this is pretty damn exciting, we’ve a cool surprise that’s going to happen in a few days. We’ll be in Wales with Duff McKagan, Ugly Kid Joe and Alice Cooper. What better moment to bring out Phil Campbell from Motherhead and play Ace of Spades. The cool thing about that is firstly, just that it’s going to happen. Those dudes are pretty fucking cool. And secondly, the tour is only 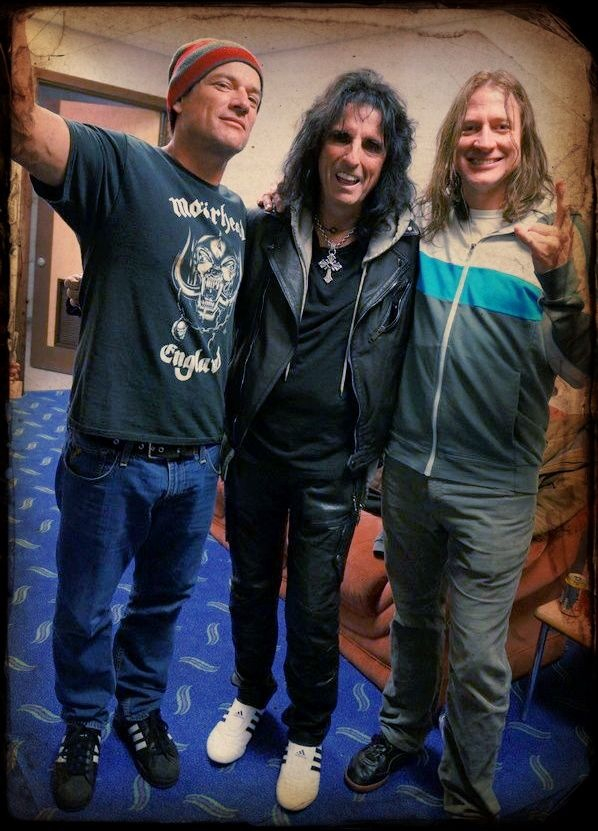 two weeks. It’s good that we will do something right away that brings the synergy of a tour together. Usually if it’s a six week tour you get like two weeks in until everyone gets along – or doesn’t! In this case right away, we’ll celebrate music together, and music’s the greatest ambassador in the world. Everybody loves melody and rhythm.”

*Since this interview Crane has met Alice Cooper, as you can see in the photo to the right.

Team RAM: So Stairway to Hell was an EP, any plans for a full album?

Whitfield: “Probably not a sixteen song record. But I think we’d go do eight songs, no problem. And we can go do it in house. If you’d asked me in May, I would have said I don’t know. In fact I would have said no, because would anybody care about Ugly Kid Joe music? If people enjoy it, and people are entertained or inspired, we can music forever, and we can. We can go at the drop of a dime, go and make music, that’s pretty neat. We have a lot of stuff to draw from, and one of the greatest luxuries we have with me being the label, is that we’re not pressured in an obnoxious way to create. You know back in the day when you blow up, which is a gift undeniably, you’ve got a bunch of people that are like bring me another fucking hit. That’s a weird moment because that’s not natural. So I believe the music we will make and the music I will be involved in, in the future, the long haul, I would hope that it would be a natural chain of events. That it would be fun, you know, getting together with people you want to work with to get that great synergy.”

Team RAM: So there’s this little election, thing going on back in the U.S. Any opinions, thoughts?

Whitfield: “I vote for me. I vote for this moment right now, I vote for Alice Cooper shows. Politics are fucked up, and I’m not educated enough to really give you any opinion, and if I was educated enough I might have to jump off a bridge. I mean really! So I’m not political, and that’s not to say that someone who is shouldn’t be. I’m for the moment. I just shake my head, I mean it’s literally entertainment, like Fox News… there’s not a lot of integrity in the whole thing.”

Team RAM: Any message for fans in the UK?

Whitifled: “Uh… If you put a jay at the end of UK, it would be You kay Jay? I’ve never said that one ever. We’re excited about Stairway to Hell, we’ve got a new video coming out in the next few days, we’re stoked. We’re coming back in November, and early December. Got a weird show in Wales and a couple of other shows. But whatever reasons the UK seems to love us. And you gotta strike where the iron is hot.”

Team Ram: Whitfield Crane, thanks for speaking to us.