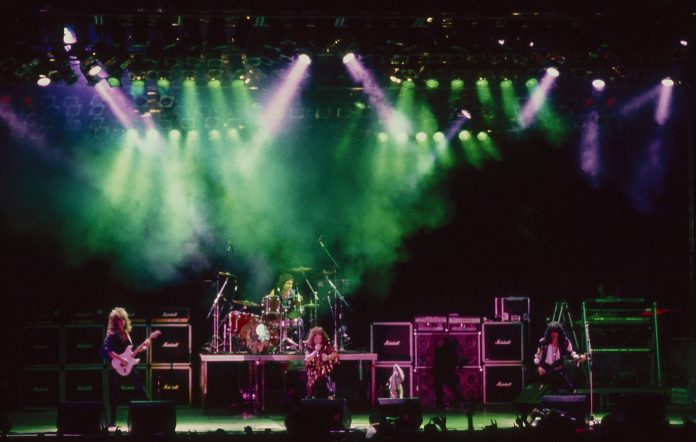 There are so many things about Dio’s Holy Diver Live offering that I wish to tell you about and to discuss, which primarily has to do with the fact that yours truly was there and very much present when the glorious thing was captured on tape and video at London’s sadly missed Astoria venue, which was located on Charing Cross Road back in October 2005. It’s one of the most memorable and captivating concerts that I have had the privilege of attending. The prospect of experiencing the timeless Holy Diver LP (1983) in its entirety along with a good number of other classics from the Dio song catalogue, as well as Ronnie’s storied past with Rainbow and Black Sabbath, was just too good to miss. A couple of us friends traveled from Denmark to the pulsating city that is London to witness the event, and believe me when I say that it was totally worth it.

While the new artwork and layout that adorns this 2021 reissue is no improvement on the original CD/DVD version that was released in 2006, the remastered sound is a huge plus here and it comes across as crisp, powerful, and full of texture. Other than the passionate delivery of ‘Holy Diver‘ from start to finish, perhaps the most notable and exceptionally cool thing about this soul-stirring opus is that we get gems such as Rainbow’s ‘Tarot Woman‘ and the majestic ‘Gates of Babylyn‘ — not to mention Sabbath’s gloomy stroke of epic genius titled ‘The Sign of the Southern Cross‘ from the hallowed Mob Rules record (1981). Rainbow never even performed ‘Tarot Woman‘ themselves on the Rising tour (or any subsequent tour for that matter), as Blackmore felt that they could not make it work in rehearsals. The inclusion of the melancholy ‘One Night in the City‘ from Dio’s Last in Line LP (1984) is also quite the treat.

Ronnie James Dio never turned in a bad performance but one could make the argument that his vocals are slightly rougher around the edges in places here than on, say, Evil or Divine – Live in New York City (2003), or the criminally underrated Dio’s Inferno – The Last in Live (1998), just to compare to a couple of Dio live albums. Having said that, he still sounds amazing throughout and the band is firing on all cylinders. Guitar slinger Doug Aldrich returned to the fold for this short tour as Craig Goldy was unavailable for a few months back then, but Doug pulls it all off in style and his fluid, melodically gorgeous way of playing suits Dio’s material perfectly. Rudy Sarzo (formerly of Whitesnake and Ozzy Osbourne) is phenomenal on the bass and lays down a thick, solid groove with drummer Simon Wright (formerly of AC/DC). The only real downside to Holy Diver Live is the inclusion of the guitar and drum solos as they add very little of value or relevance to the proceedings, but then again, they were aired that night and so for completion’s sake someone must have decided that should be present on the discs. Everything else on here is pure gold, though.

I do feel that this gig was of historical importance and that the Holy Diver Live release has been vastly underappreciated and overlooked, but here is to hoping that this 2021 edition of the splendid thing will generate more praise and be celebrated for the superb record that it is. The output offers 113 minutes of startling depth and heavy metal excellence, and you are wrong if you think that this one is less essential than any of the other concert albums that Ronnie has appeared on because, well, you really cannot have too much of a good thing. For me, I can still feel the warmth, joy, and excitement of the show when I close my eyes and immerse myself in these discs. What a beautiful feeling that is.

Holy Diver Live was released on 12th February via BMG