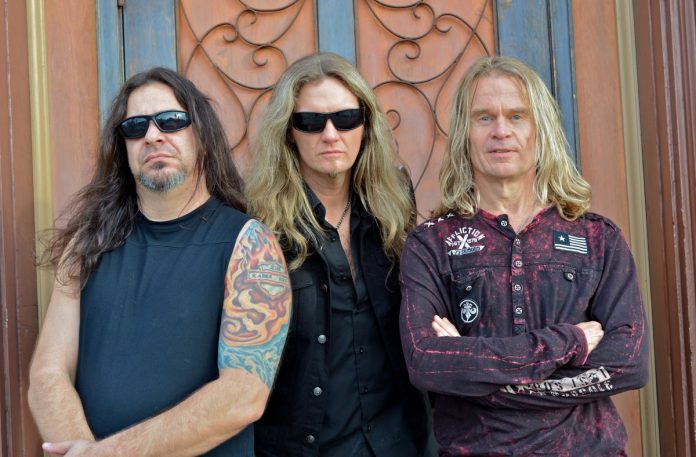 Each of them being a more-than-seasoned professional, those same initials writ large, spell out the album title of Very High Frequency, that does a pretty good job of explaining what’s on offer musically across this short, largely instrumental, rock album.

Based on the titles offered for the tracks and the overall scope and sound of the music offered, if you recall Queen’s connections with the 1980s re-edition of classic Metropolis science fictionmovie from 1926, this is more akin to someone taking the essence of some Cecil B. DeMille biblical epic, leafing through The Egyptian Book of The Dead and rebooting the Stargate franchise as some rock theme-tracked Netflix series.

Save from the players utilising their individual instruments and effects, there are radio transmission voiceovers, and one song spoken.

It begins with ‘Shattered Insomnia’ and here you should picture some computer game car chase scene set to rock music with neo-classical guitar filigrees and the odd mellower prog-like moment. Changing pace, we get a hard driven rhythm coming in at the back end as multitracked guitars edge towards the blues then everything goes into double time and back again. Something of an exhausting ride.

‘Whispers Of The Soul’ follows and is both eastern and eerie, drummer Vinciguerra’s presence is felt greatly on this one, while Hoekstra guitars are often treated with effects; that soul might whisper early on, but it gets to do some multi-track screaming later on.  ‘Suspended Animation’ is something of the sci-fi follow on, rhythmically different, the divergent guitar melodies between electric and acoustic calling to min former Genesis guitarist Steve Hackett’s solo work, whereas ‘Conception To Death’ falls into King Crimson noise/art rock territory where intermeshing cranked up distorted guitars and gentler music box melodies reside – Picture a reanimated Vincent Price in a video for this shorter number.

‘Invisible Thread’ begins with a more jovial space prog approach, with an Ozric Tentacles miasma of sound, progressing into cosmic downer blues then a searching mystery of heavier rock and jammed out fusion, Possibly featuring the most singular guitar solo on the album, the number fades Tangerine Dream-like softly into a black hole of seemingly no-return. That is, until the spoken word ‘Backside Of Your Eyes’ follows with a throbbing beast of rhythmic sound chasing after wailing guitars, with more house of horror melodies interspersed madly. It’s like Pink Floyd gone grunge in places, neo-classical and melodic death metal elsewhere. As the rhythm section gets ever more gruesome in their slow attack, the guitars become ever more strangled in their attempt cries to escape.