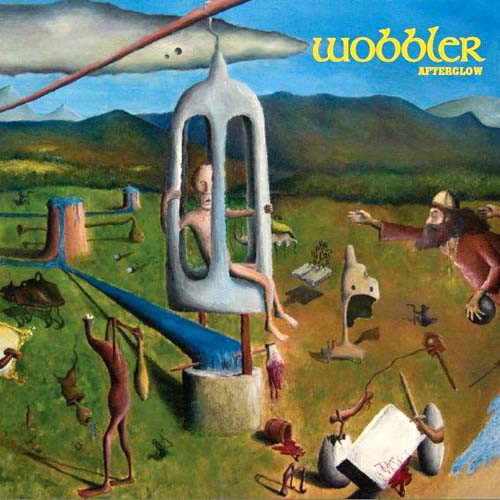 Now, this is a real treat. Having been a huge fan of Norwegian prog rockers Wobbler ever since the release of their From Silence to Somewhere opus in 2017, it was simply fantastic to receive the CD versions of these upcoming reissues of their first three outputs, more specifically Hinterland, Afterglow, and Rites at Dawn – all of which will be released in late January via Karisma Records.

Crammed with ideas and overflowing with enthusiasm and energy, Hinterland (2005) is a musically dazzling debut offering. Wobber’s first proper excursion into the land of warm-sounding, organic prog rock is endowed with a heartfelt quality that makes it very hard to believe that it is merely the group’s first full-length. Is it a fully formed and flawless masterpiece then? No, not quite. The vocals are not always entirely up to scratch and lack conviction in a few places, and there are a handful of times where it could have been more cohesive, but make no mistake, it retains its fresh edge all these years later and it still possesses a unique spark. What a truly magnificent start to Wobbler’s inspired and inspiring career this is.

Afterglow (2009) is slightly darker, heavier, and punchier than both Hinterland and Rites at Dawn and is almost entirely instrumental. At 34 minutes long it never outstays its welcome and is a relatively short and concise affair in many ways. Consisting of three short pieces and two long compositions (essentially re-workings of their demo tracks), it is an incredibly strong collection of songs and a satisfying listening experience from top to bottom. There is a youthful charm and vigor to it that is appealing, and the way in which they vary the tempo and tone throughout is admirable. How could anyone possibly resist the Baroque vibe of ‘Armoury’ and ‘Interlude’?

Rites at Dawn (2011) contains plenty of light and shade and is as playful and it is eclectic. A pastoral feel seeps into the tunes now and then, and huge chunks of the record are almost akin to something that Yes could have done in their heydays. Emotive vocals and a touch of mysticism make for an enticing and intriguing listen, and Andreas Prestmo’s vocals are sung with authority. Lyrically, it has a lot going for it as well, which is perfectly illustrated by the ethereal ‘This Past Presence’.

For some reason, listening to these three discs brings to mind the masterpiece that is Godbluff by Van Der Graaf Generator and to a lesser extent Mirage by Camel and Red by King Crimson. It must be something about the aura or mood of the compositions, right? There is a prominent sense of melancholy to these albums that is able to enthrall the listener and stir the senses, and what never ceases to amaze me is how musically adventurous Wobbler were from the get-go and how that daring and inquisitive spirit permeates their entire discography. As evidenced by the Hinterland title track, ‘Imperial Winter White’ from Afterglow, and ‘In Orbit’ from Rites at Dawn, these skilled gentlemen were musically ambitious, yet they were always able to bring their visions and ideas to life in a confident and seamless manner. When listening to these reissues, it never feels as if Wobbler were overreaching. There was a magic at play from the very beginning and it is unbelievably cool that these much sought-after gems will finally be available on vinyl and CD again. The excellent liner notes to Hinterland and Afterglow are an added bonus.

The reissues of Hinterland, Afterglow, and Rites at Dawn will be released by Karisma Records on Jarnuary 28, 2022.