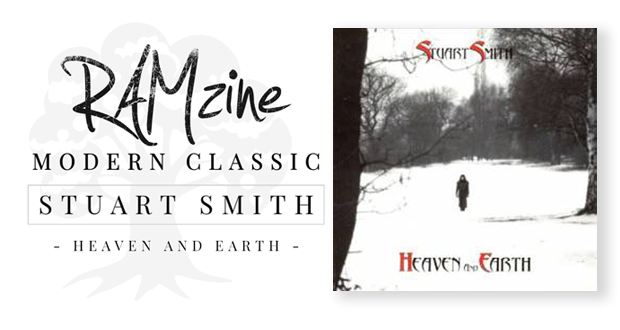 Take an album from a guitarist who was taken under the wing of Ritchie Blackmore no less; pepper the album with guests such as Richie Sambora, Joe Lynn Turner, Glenn Hughes, Carmine Appice, Howard Leese, Kelly Hansen, Chuck Wright and Richie Onari; add in some quality, original writing and a few choice covers and you get one of the most overlooked heavy, melodic rock classics of recent years.

Stuart Smith was the guitarist mentored by Blackmore and Heaven and Earth was the album that featured this impressive list: the album title also went on to be the name of Smith’s band. Confusingly, there are at least three CD versions out there and I have all of them as each one has a different tracklist, and I’m a completist fanatic. The first came out in 1998 with eleven tracks, the second in 1999 with sixteen and the third in 2004, also with sixteen but a couple of changes in the selection. For the purposes of this overview, I’ll use the 2004 release. [The 1999 version is a Japanese import (on the Pony Canyon label) I bought at silly money just because it has a brilliant take on an instrumental classic from the sixties… ’Telstar 2000’ sticks to Joe Meeks’ original, but updates it superbly.]

The covers are a matter of taste and contention: for me, Purple’s ‘When A Blind Man Cries’ doesn’t quite work although very good instrumentally, whereas the reworking of Gary Moore’s ‘Still Got The Blues’ with Smith introducing it with a nice acoustic piece before the main melody comes in electrically and his solo is (nearly) as good…the same but different. Joe Lynn Turner (JLT) does a very empathetic job too whilst still being JLT.

The major album highlight, however, is another cover; this time of an old Blind Lemon Jefferson song, ‘See That My Grave Is Kept Clean’ and, in my humble, it has Glenn Hughes’ finest vocal performance… ever. Backed by a stunning arrangement where the guitar is simply genius, Hughes is imperious and it’s worth getting the album for this alone.

Elsewhere, we get a couple of Blackmore and his Night kind of touches with ‘Dream Of Desire’ bringing the mediaeval maypole intro before a very enjoyable ‘Difficult To Cure’ moment. Then, with ‘Shadow Of The Tyburn Tree’ we get a full-on Night approach with penny whistles et al… and JLT doing his best Candice. Seriously, for what it is, it is actually very good as it tells the tale of a real site of execution by hanging, although it does lack a guitar solo.

Melodic heavy rock makes up the rest of the album with some perfect examples of the genre: ‘Do You Ever Think Of Me?’ is the pick of those as Kelly Hansen puts in a great vocal performance over a very strong rock track. As does Bobby Kimball on a Hammondy Purpley slice of quality called ‘Life On The Line’. The fine US bluesman Al Mirikitani also provides two tracks and two great performances, the best of which is the lovely blues of ‘When The Blues Catch Up With You’… sadly no longer with us, Al passed away in 2015.

This may have been a purchase due to the ‘guests’, but it takes but seconds to appreciate how good a player (and writer) Smith is… and he’s no Blackmore clone even though he had such an influence on him. If you like high-quality rock, melodic rock, blues and the odd folkiness, this is an essential album, packed with great performances and great songs.

It is still available but could be one of the other versions, but as they’re all good, just buy it!