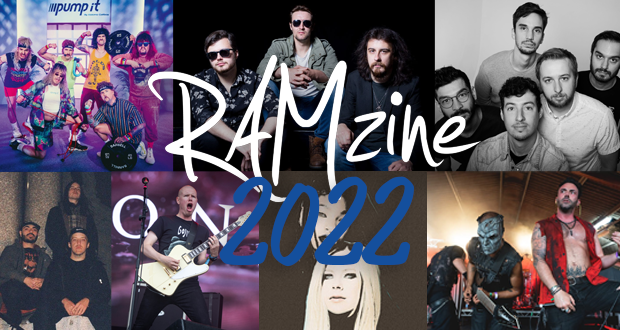 2022 is likely to be the ultimate year of new music, with bands across the world not having been able to tour or play many live shows over the last few years, there has been a lot of downtime for music creation. Our RAMzine Team come from all different walks of life, and we may all have different tastes but we are all here for the plethora of Rock, Metal and Alternative Music that will be hitting stores this year! RAMzine, as always, promises you a range of honest coverage across many different types of alternative music!

We are currently on the hunt for more reviewers to join our team, if you have a passion for music and are interested please email vicky@ramzine.co.uk for further details.

North East born, South West domiciled music lover – mainly heavy rock & blues but not averse to other genres. I’m fortunate to have retired early & I can now take full advantage of the 40+ years I have spent collecting, listening, watching & playing (badly) & have enjoyed researching how blues in particular has shaped the music we know & love today. Now if only I could get my Strat & Musicman to sound in reality how they do in my head!

I have to choose Heavy Feather with their excellent second album, Mountain of Sugar that, if they had been able to tour and promote it properly would surely have elevated them into rock stardom… it is that good.

Hot Milk are a dual vocal pop-punk that absolutely GOES OFF. Big mouthed and bold as hell, Hot Milk doesn’t shy away lyrically or on stage. Expect biiiig things in 2022.

I am the human personification of a rainbow, who likes dressing as a unicorn in her spare time. Originally from the boring north of England, been living in the exciting capital for 5 years and wouldn’t look back once!.

As cheesy as it may sound, Avril is finally back in the spotlight, and her releases this year make me yearn for a new album (finally!) to erase her last one from memory. I’ve also been waiting two years to see her live (thanks, Covid!), hopefully, March 2022 will be the year I finally do.

From Tyne & Wear, I am a vintage clothing collector and seller, a freelance writer and wine salesperson. Sadly I have only been to one festival, Bloodstock, and one gig this year – Michael Schenker Group.

Although they have been around since the 2000s, they completely reinvented themselves recently with tracks like ‘Hypa, Hypa’ and ‘Pump It’ – elelctronic metalcore with a comedy edge. Also, they are looking to represent Germany at the Eurovision Song Contest. They could be this year’s Maneskin.

The most exciting band that I saw live last year was Red Method and as I said it my Badgerfest review “Red Method are brutal enough, melodic enough, original enough, with the stage presence that could just make them the next big thing!”

Retired teacher, now a writer and living in Mid Kent.

The Mentulls are a hybrid of blues, prog, commercial rock, and influenced by early Genesis and Rush. Their latest album, Recipe For Change, suggests they have what it takes to make a name for themselves.

I’m a writer and self-professed music journalist with 5 years of experience covering heavy metal shows across the North West of England. I like to think I have a broad taste in music but I prefer Progressive Metal.

Arch Echo are an instrumental progressive metal band that have recently released an EP, Story I, which manages to be melodic and grandiose without resorting to the usual prog tropes of writing songs that seem to go on forever. With Story II on the way and their tour supporting Dream Theater, Arch Echo have a lot to gain in 2022 and very little to lose which is exciting for all involved.

Old school thrash mixed with a little hardcore and a lot of energy. Their first full-length LP Unscrew My Head was released in 2021 via Cash Only Records, to critical praise. 2022 could be the year the band builds on the wave of hype they are generating, and with live shows returning there is no better time to hit the road and promote the record and keep the momentum going. Keep an eye out for Ekulu on the festival circuit.

I was born and raised in Denmark but I’ve been residing in Norway for quite some time now. In truth, I’m a rather lousy musician yet somehow I can manage to weave a couple of decent melodies together. Luckily, I’m much better at writing about music than composing my own. Other than that, I’m more or less addicted to dark roast coffee, all eras of Black Sabbath, and baking chocolate orange shortbread.

The Norwegian progressive hard rockers Kosmodome released a fabulous debut album via Karisma Records in December 2021 and their crunchy stoner rock-inspired riffs, desert-like atmospheres, brilliant arrangements, and psychedelic vibes impressed me greatly. I’m hoping for a follow-up in 2022, but if that doesn’t happen then at least we can look forward to some live shows in or around Norway. With their unique approach to prog rock, it’s simply impossible to resist their musical charm!

RAMzine Social Media Boss! From a small town in the middle of Wiltshire.

Heriot are a metallic hardcore band based in the South West, currently on the rise. Known for their chaotic music and hectic live performances they have already completed tours with notable names, definitely worth keeping an eye on.

Conjurer are one of the bands of a generation at the moment, their sludgy post-metal style has got them noticed and in recent times snapped up to heavy metal titans Nuclear Blast. Despite our devastating times recently, the band has successfully played across multiple big-name festivals and without a doubt drawn in new fans. The impact of covid on the music scene has been crippling, and the impact hits further with vinyl struggles for new releases, as such the band are currently stuck in limbo with finishing their recent record and waiting for a time they can release it, the good news is it will definitely come eventually, and when it does, it’ll without a doubt be one of the releases of 2022! With the hotly anticipated release, you can expect Conjurer to be finally smashing out their new material up and down the country, their shows I guarantee are shows you must not miss.

Grammy Award-winning Iowan legends Slipknot returned late 2021 with ‘The Chapeltown Rag’ – their first new music in two years. There has been plenty of hype about their new material and we can’t wait to hear it!