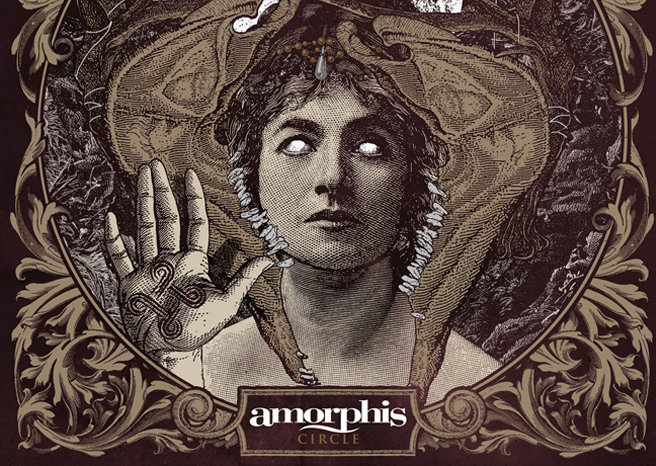 Circle, the new album by the melancholic metal masters AMORPHIS, takes you on a dark story of an unfortunate man, who is invited to a circle and receives strength from the old Finnish gods.

We are introduced to Shades Of Gray first, which has maximum energy with roaring death vocals and opens up the albums story describing the sounds and feelings of being amongst nightfall. With clean vocals taking charge during the chorus and a clearly defined lead guitar creating a great melody, the album starts off with a blast!

After that powerful first song the album gets a little more commercial sounding with the next few tracks. Mission has a soft and gentle start which sounds pretty and leads in well to the guitars. Tomi Joutsen’s clean vocals are used all the way though, a piano solo half way accompanied with very subtle female backing vocals which are hardly noticeable but adds intensity to the keyboards and adds a certain prettiness to the track, however overall this is a weak song.
The Wanderer again starts with nice melodic vocals but this time the chorus is a little more catchy. Some may say the chord change at the end makes it sound a bit cheesy and is not needed.

Narrowpath has a little more of a folk inspiration, whist Hopeless Days is the perfect example of this album undoubtably having more gothic undertones. With a real emphasis on synth and distorted guitars at the beginning, this then creates a nice contrast to the soft vocals dancing in between. Then crescendoing together.

Nightbird’s Song has the most diversity in the blending of styles, influences and experimentation. Tomis powerful death vocals come in strong at the beginning with deep growling roars and clean vocals layered in. Half way through the track is a beautifully charming folk interlude with wooden flute effects but does feel a little cut short.

Into The Abyss is definitely a track you can sing along to during the chorus and subtle female distorted vocals, behind the vocals of Tomi during the verse, adds depth and eerie feel.
An admirable instrumental half way though with keyboard solo backed up straight away with guitar solo to accentuate the melody.

Enchanted By The Moon has the most punctuated female backing vocals. This track has lots of layers of sounds and is a song to listen closely to.
Towards the end the tempo halves and gets a little more experimental with a few different synth sounds playing.

A New Day is a great name for the last song as it has given a real illusion that the plot is set between dusk and dawn. The sound of an organ plays in the background, a pretty light hearted song so fits well into the idea of the birth of a new morning however a bit of a disappointment for the final track of the album.

As albums go it has a great beginning, middle and end. It is an enjoyable listen and like the previous album more accessible compared to older albums of Amorphis. Some may feel this accessibility is ‘playing it safe’ and not pushing their experimental side enough but with this said it is definitely worth a listen.

Amorphis ‘Circle’ is out now via Nuclear Blast.