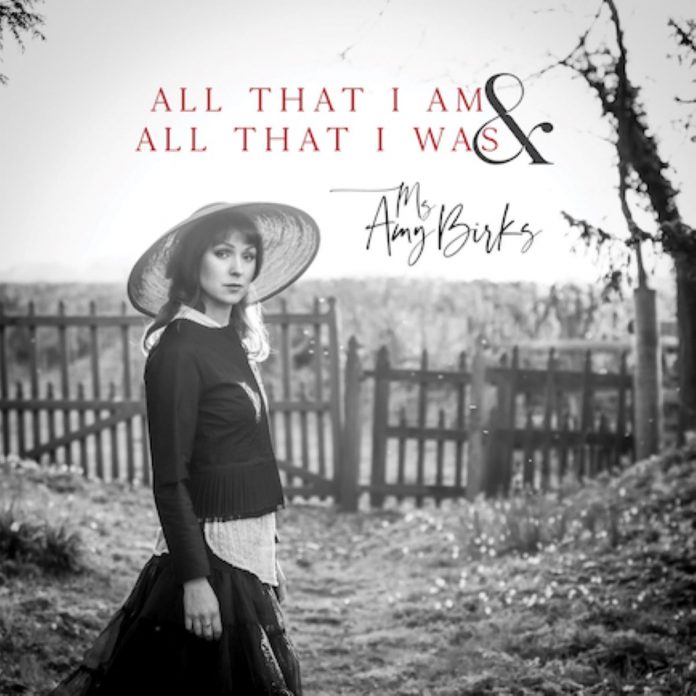 Formerly with the award-winning Beatrix Players,  vocalist Amy Birks’s debut album, All That I Am and All That I Was, is a gradual stepping stone forward in forging an identity of her own.

Gently it circles the wider progressive rock genre. Former Genesis guitarist Steve Hackett is featured on guitar the evocation of medieval folk melodies finds its echoes in Gryphon. Her voice remains reminiscent of Kate Bush, on a couple of tracks that’s pushed, mostly it’s the natural timbre of her voice, and a more clearly pronounced less affected one we should note.

Opening sombrely with minimal piano, vocal harmonies and other instruments picking up in a madrigal of motion, is ‘Jamaica Inn’. A dash of courting dalliance then hints at the undertones of modern pop R ‘n B vibe that doesn’t come to actuality, but could prove an interesting musical crossover. Throughout, voice and instruments come in rushes of waves heading towards a prog-touched crescendo.

‘Unlike The Heart’ might have been the song a young Kate Bush wrote if she’d been spending time with Van De Graaf Generator’s Peter Hammill round about the time he recorded his break-up Over album. It is a tune of melancholy remembrances and the cello playing is simply lovely. ‘More’ follows in a similar manner, albeit veering into Beverley Craven territory.

‘Not Every Night’ benefits from a more travelled piano ranging over its precise backing. A sojourn as such, musically while it’s more wistful in thought lyrically. It has to said that the point of view being expressed vocally is ambiguous on many of the numbers. Less so with ‘With All That I Am’  that tells of a thwarted love, and most particularly with ‘Say Something’ – This latter song has an almost musical box feel but it doesn’t drift into whimsy, being more profound, and not couched in sweet rhyming couplets as it deliberates sagely on an early affair wherein she was one of the protagonists. Her being the victim when younger of a more mature figure intentions, and presumed actions.

‘Catherine’ almost feels a second person continuation of the previous number, denoting the person was besotted. Again, musically, the instruments are allowed to play out and expand beyond being mere accompaniment, here the strings feel the benefit most building towards a major finale before folding back fittingly.

Instruments wrap themselves around the comforting words of ‘All The Fault Of The Lady Anne’ while a sense of calmness prevails as the piano flows in ‘Road To Gordes’.

On ‘I Wish’, the introduction of a classical guitar played by Steve Hackett offers a welcome aural sonic change. The song’s syncopation and melody a veritable dance with the addition of harmony part vocals drawing the listener’s attention. Amusingly, ‘Keeps You Guessing’ evokes a pre-Hackett Trespass-era Genesis albeit that it’s also haunting pop folk goth in mood. Here the lead vocals break out their comfort zone with dramatic purpose.

All That I Am & All That I Was is filled with tempered observations.  Lyrically it tends to musing over emotions rather than deliberate deep choices being made or frustrated emotions expressed. Incidents are outlined. albeit not in a tenser drama, save a few pertinent numbers.

The songs tend to be on shorter side so pretty and melodic but with no great thrust of urgency towards climactic statements of cathartic intent. Keeping instrumentation to a minimal proves both a strength and a weakness; expanding the dynamics palette for what’s an obviously gifted vocalist, and collective of talented musicians will only benefit future releases.