Review: Sinsaenum – Echoes Of The Tortured 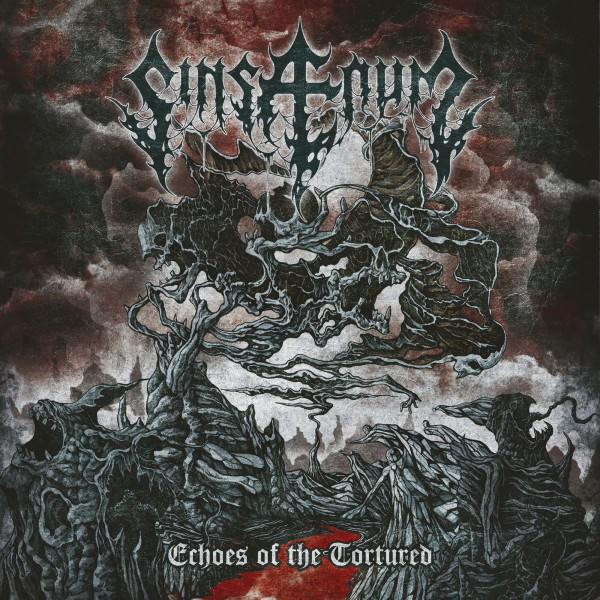 The much awaited album Echoes Of The Tortured is released July 27th. The extreme-metal supergroup is fronted by Mayhem and Sunn O)))‘s Attila Csihar, along with Dååth and former Chimaira keyboardist Sean Zatorsky; it also includes current VIMIC and former Slipknot sticksman, Jordison, on drum duties, Dragonforce bassist Frederic Leclercq on guitar and Seth‘s Heimoth on bass.

The album is interesting to say the least – it really is a mixed bag. At times its full on death-metal, other times it’s simplistic approach to riffs and drums offer something heavier. There are thrash solos which absolutely wreak of Chuck Shuldiner’s Death and then other times there are small hints of an evil, black-metal sound.

Things kick off with ’Materialization’, an intro piece to what is a staggering 21-track album. Fortunately, however, there are no real lengthy songs. ‘Splendor & Agony’ is where things really get started though and it offers what was really expected from the band all along, with Jordison’s signature drum sound to boot. Quick double bass-drum patterns, blast beats and Attila Csihar’s death metal growl is a sign of things to come as we move forward with the album.

‘Army Of Chaos’ offers a more traditional groove based black-metal sounding track that takes the album away from a full-on death-metal album, while ‘Dead Souls’ slows things down to a head-bangingly good tempo with some unforgiving chugging of the guitar.

‘Sacrifice’ is almost the group’s tribute to bands such as Dark Funeral, whereas ‘Anfang Des Albtraumes’ feels like something that would come from a new Morbid Angel album with its sheer tempo and death-metal feel.

Title track ‘Echoes Of The Tortured‘ is one worthy of holding the album’s title for sure with its relentless barrage of brutality from start to finish – a track that really does not let you up for air at all. It’s easy to see why they named the album after this with what feels like the standout song from the 21.

It’s hard at times to get stay focused throughout the playthrough of the album though. Whilst it has some great music that death metal fans will surely be happy with, the sheer amount of tracks that are either short intros or instrumental pieces compromise the flow of the album at times, and feel as if they don’t really add too much value to the overall product. But the actual songs themselves have everything you’d want in an album that covers such genres.

Don’t get me wrong, this is great death metal with a blackened twinge. The names involved in the effort are enough to carry the album in itself. I can see Sinsaenum being a top draw for the European extreme festival scene next summer for sure.