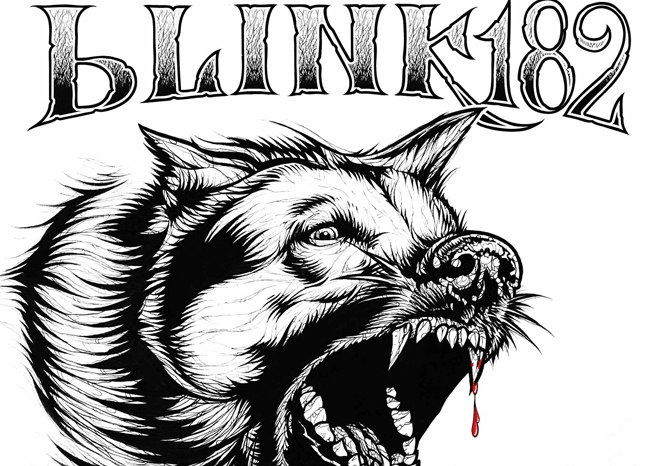 Blink 182 are certainly not the band they used to be. Gone are the days of the naked band singing songs about wanting to perform sex acts on household pets and friends parents and a new era has been ushered in, an era of maturity and adulthood but fear not, there is still the spark of the adolescent Blink flickering away in the background.

Dogs Eating Dogs marks the next step in the evolution of the band. A step upwards and forwards from their last offering Neighbourhoods it has a very revitalised and energetic feeling, like they’ve rediscovered what it is to be a in this band together and this is readily apparent from the second the first verse of opening song When I Was Young flies into action. Older fans of the band will also be happy to hear that singer Tom Delonge has rediscovered the Californian ‘whine’ in his vocal performance that made his style so iconic in the early years of the bands career. One aspect of Blink‘s already strong arsenal that has done nothing but improve from release to release is the quality of their songwriting and on Dogs Eating Dogs it is nothing short of stellar. As this EP progresses it never wavers. From the offbeat cymbal opening of title track Dogs Eating Dogs to the poetic beauty of Boxing Day this EP is an absolute delight to listen to.

One slight curve ball does appear, however, in closing song Pretty Little Girl. This is a song that is reminiscent of After Midnight from the Neighbourhoods album or perhaps even Down from the bands 2003 Self Titled offering. This song is the same as any other one this EP in as much as its extremely well written and performed but the twist comes in the form of a guest vocal appearance from Yelawolf. His appearance in the song is short but affective. A verse that fits into the rest of the song so seamlessly that you would think he was part of the band. Gone as quickly as he came, Yelawolf adds yet another refreshing dimension to this EP that constantly keeps the listener guessing.

There is not really any logical reason for a lengthy summary of this release, suffice to say, it is astounding. As an interim release (hopefully between albums) it whets the appetite perfectly whilst still giving an accurate representation of the way the band is evolving and what musical paths we can guess they will begin to tread on their next full length release. The performances of Tom, Mark and Travis individually are more strong and impressive than before with the vocal parts sounding fresh, light and energetic where they need to be and more soft and melancholy where appropriate. The one real unchanged aspect of the band is that Travis is sounding especially impressive, as always.

This is a must own for any fan of the band and indeed any fan of great, honest rock music.