Downfall of Gaia ‘Suffocating in the Swarm of Cranes’ Album Review 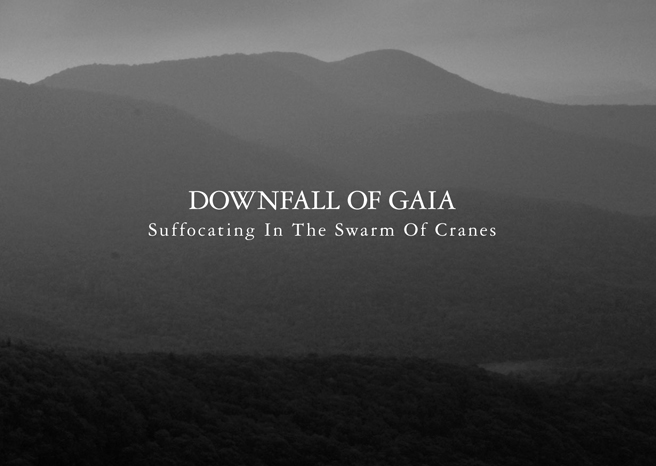 The cool stylings of Downfall of Gaia are displayed in their latest album Suffocating in the Swarm of Cranes, a real floaty album with points of musical genius dispersed with bouts of metal-standard vocals and heavy drumming. Talk about clash of the titans.

First thing that struck me by Suffocating in the Swarm of Cranes is that this is an album that sounds like it is meant to be a live album not studio, because of the way that each song blends into the next. The other thing that struck me was that the length of each track was well above and beyond the stereotypical three to five minutes you stereotypically find on this kind of album. Unsure whether that is a good thing or bad, there are definitely interesting points about each song.

Opening with ‘Vulnus’, it starts off slow and distorted, building pace and tempo until it becomes really energetic and loud. This doesn’t sound like an introduction to an album, more the opening piece for a set, but sets up the album regardless, giving hints at what is likely to be heard throughout.

‘Asphxia’ and ‘Beneath the Crown of Crows’ are the best tracks to be found here. ‘Asphyxia’ seems to be a blend of Latin-American music, with a huge chunk of metal-standard in the middle, but ending strangely and mysteriously with electro-static – almost like someone pulled the jack out of the amp prematurely, but ending purposefully. While ‘Beneath the Crown of Crows’ sounds like an interlude piece, using white noise to create a supremely eerie sound, and as the album’s shortest track it is very accessible to all types of audiences.

Storylines can definitely be felt in ‘I Fade Away’ and ‘Giving their Heir to the Masses’. If you see a kind of epic battle scene from a film in your head, then ‘I Fade Away’ will be the track that they play when someone is dying and the decides to get up for one last scrap for victory. Although you can’t tell who has won (usually there is some sort of key change to indicate “good” or “bad” winning), there is a definite positivity that comes out of this track in spite of its down-tone nature. If metal had a romantic side, however, then ‘Giving their Her to the Masses’ would be the “just been dumped” track – heartbreakingly beautiful due to the cascading chord structure, they have included violins to really stick the knife in. The ending is also very brutal.

The key thing to note about this album is the echo-effects that have been applied – it gives every song a really grandiose feel, that we are not sure works for a studio album. It gives the impression of sitting on the edge of a huge pit (and anyone who has been to a gig at Milton Keynes Superbowl can fit the location to that feeling) but still being able to hear the vast majority of the music. There is a lot to question here, though, as the only reason this tips into the ‘metal’ genre is because of the random bouts of it – are these incidental, put in place as expressive instruments, or just the songwriters favoured category. Either way there are cases where it works impressively and falls flat all over this album.

Good, not great, but there is definitely potential for greatness from this band.

You can buy their album here