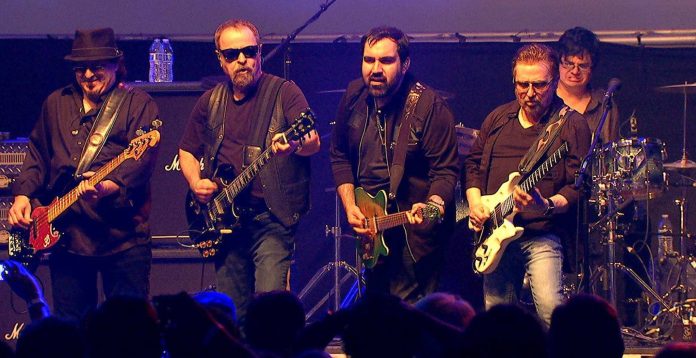 The mighty Blue Oyster Cult (BOC), forty-eight years young, still with two of their original line-up and still going strong, are American classic rock legends and, in their time, they’ve amassed huge critical acclaim from contemporaries and from the fans. Several of their songs are right there at the top of rock’s high canon, notably ‘Burnin’ For You,’ ‘Godzilla,’ ‘Then Came The Last Days Of May’ and, of course, that song.

In their mid-seventies pomp, they were a match for anybody and, because of their compositional ability and fondness for obtuse lyrics, they were unfairly dubbed the thinking fans’ heavy rock band. But they survived all this and went on to become one of the mega names in US Classic rock. Despite the shameful ignorance of the BOC by the Rock ‘n Roll Hall of Fame, nonetheless, they’ve influenced bands like Iron Maiden, and Metallica covered their song ‘Astronomy’ on their Garage Inc album. In 2017, after forty-five years as a band, the BOC celebrated their anniversary with a special tour where they performed a complete run-through of their 1972 debut album, Blue Oyster Cult, in its entirety, and this recording of it, their latest live album, was recorded at the 02 Indigo, London.

This is either BOC’s eighth, ninth or tenth live album, depending on whose list you believe, but this is the first where a whole album’s being performed. Two-thirds of this CD is comprised of the original album, performed in the exact same running order as when released. The only problem with doing this is when one of the tracks is a rock classic, and this song is performed very early in the set, it can have the tendency to make some of the tracks which follow sound anti-climactic, which is the case here with the epic ‘Then Came The Last Days Of May,’ with great guitar interplay between original members Eric Bloom and Buck Dharma. Fortunately, BOC have enough good songs on this album to overcome this potential handicap, notably ‘I’m On The Lamb But I Ain’t No Sheep,’ ‘Cities On Flame With Rock ‘n Roll’ and the charmingly titled ‘You’re As Beautiful As A Foot.’ After this they give us two stone-cold classics in ‘Godzilla’ (surely one of the great underrated riffs) and ‘Don’t Fear The Reaper,’ and they conclude with the powerful ‘Hot Roads To Hell.’

This is an album packed with classic rock performances and a few timeless riffs, and though it’s unlikely to trouble any list of the best-selling albums in 2020, it’s a timely reminder, close to their fiftieth anniversary, the BOC can still rock and punch their weight.