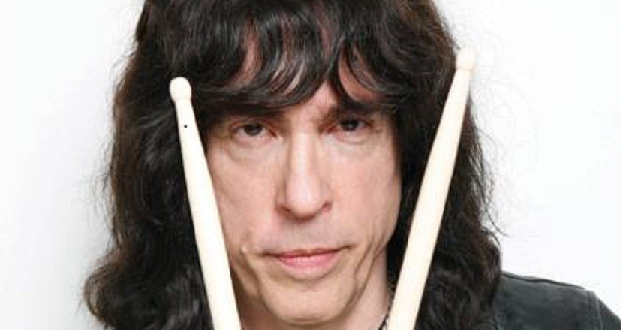 Everyone knows who the Ramones are. Everyone’s heard ‘Blitzkreig Bop’. You can even buy a Ramones t shirt in your local Tesco superstore. Yet, at the peak of their career, the punk-rock pioneers wern’t as recognised as they are today. They were at the centre of the punk explosion in the late ’70s, and stayed punk. None of the original members have survived, unfortunately, but ‘Punk Rock Blitzkreig’  tells the story of Marky Ramone – real name Marc Bell – who joined the band at their apex. You  might not see the name ‘Marky’ on most of the iconic tshirts, or recognise him on any of the vintage photos but Marky saw the good and bad side of the legendary band.

Like most biographies, the book starts with his childhood and introduction to music. This demonstrates his true love for music and first taste of performing with school bands, plus being let in to Led Zeppelin concerts at an early age. We don’t  get in to his career with Ramones until a third in to the book. This is no surprise as he joined Ramones slightly later in life. Even so, you find yourself wanting to skip to the ‘juicy’ bits.

If you want entertaining and revealing stories about the more well-known Ramones (that rhyme was unintentional, I swear) this is definitely the book for you. Marky is known for his way with words, as you may know from his radio show which shares the name of this book. We hear about the things you didn’t know about Joey, Dee Dee, and Johnny Ramone.  We also get an incite in to the film of cult movie ‘Rock N Roll High School’ which takes up a huge chunk of the book.

What is most enjoyable about this book is Marky’s story-telling. You can tell a new can of worms is being opened each chapter. What slows it down is the unnecessary details he leaves in the anecdotes. This is a problem I had with Morissey’s autobiography, and in a same way it slows the pace of the story. Nonetheless a great read for any Ramones fan, or any rock fan. Pick it up if you are in to tales from backstage of bands on tour.