Book Review: ‘You Me At Six – Never Hold an Underdog Down’ by Neil Daniels 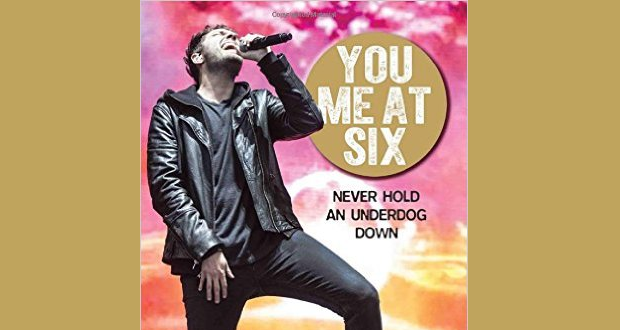 You Me At Six have enjoyed a pretty impressive growth within the UK music scene – so it’s no real surprise that fans can now get their hands on an unofficial biog charting the Surrey boys’ rise to acclaim, with both fans and press taking a big interest in whatever they do next.

The book mainly deals with the band’s musical career, rather than any deep or personal aspects of the band and its members, compared to other musical biographies. However, the insight into the band’s rise to impressive fame is an interesting read, especially regarding criticism they’ve received from other artists, press and rock fans overall – particularly around their catapult into the mainstream over the past few years.

The book definitely goes into depth and detail well, covering everything from the history of their influences to a chronology of their touring activities, which played a large part in building their reputation within the music scene and mainstream entertainment world. There are plenty of interesting side anecdotes in the book too – readers will discover that You Me At Six and the majority of their rock contemporaries are vetoed from the X Factor song choices. Which is probably a blessing, really.

In the centre of the medium-length tome, there’s a four-page colour insert of images from different times in the band’s career, where those of us who recall MySpace very well will recognise the band’s haircuts. There’s also a handy discography at the back of the book.

Neil Daniels has definitely researched the book well, drawing on a range of sources from across the music press, both online and offline, to compose an impressive history of the band’s success to date. Despite the writing style sometimes veering towards the ‘fandom’ side of things and the odd bit of hyperbole (we’re feeling that ‘the UK’s answer to Foo Fighters’ might be a BIT of a stretch), it’s an enjoyable read for anyone who’s a fan of the band.