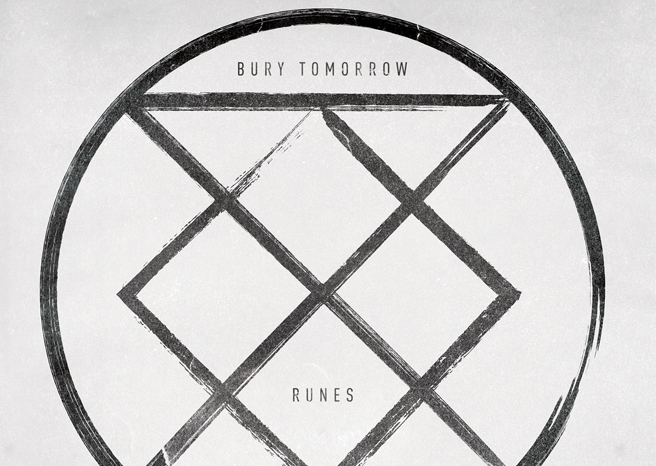 Southampton Metalcore giants Bury Tomorrow are set to released their third full length studio album soon tilted ‘Runes‘. The album cover shows a mysterious symbol in black over a white background which shows a certain branding and unexpectancy of what you expect from the album when first purchasing.

‘Runes’ is the third step of the ladder on the bands quest of concurring the alternative metal scene and making it their own. From listening its clear that a lot of work, passion and thought process has been put into making ‘Runes’ the record that it is. Based around a concept of divination and the future however the album is not a concept album in sense of telling a story. What the album does deliver though is track after track or sheer creative fury that only a band such a Bury Tomorrow can bring to the table.

The Album opens up with ‘Man On Fire’ which was chosen for the second track released as preview of ‘Runes’ – this teased us fans into wanting more and shortly after became the bands first video release of the album. The song opens up with crushing vocals from Dani Winter-Bates followed by companying riffs which will be the perfect mixture for any metal or metalcore fan. The song also showcases a very catchy and well written chorus of clean vocals which are sure to be shouted out at many live shows. Before finishing with a gentle guitar which seems to bridge to more to come.

The album them progresses to the second song ‘Shadow, A Creator’ which again shows the perfect mix of cleans, highs, and lighter vocals and guitar riffs. Perhaps this song mostly has you captivated with the story more then the furious tempo. ‘The Torch’ starts off with chorus choir like vocals of “I’m told the end is not far away” before allowing Dani to blast his vocals which are sure to get the crowd moving and it also showcases one of the best breakdowns on the album in my opinion. 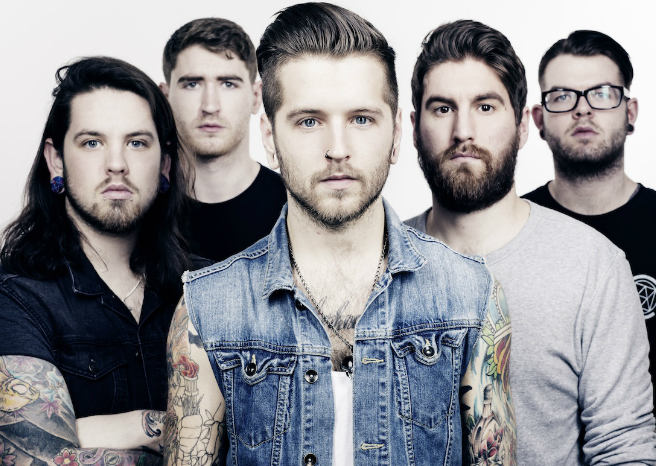 Now we are at a stage in the album where things progress to get even faster with ‘The Watcher’ which opens with a mass guitar riff while allowing Dani to deliver the vocals of “I am forever the watcher” which again shows a mixture of clean vocals in the right places and heavy screaming to keep the pace going nicely. Shortly after ‘Our Gift’ opens with powerful screaming which is sure to get people moving and open pits worldwide. This song really shows the range of vocals of which Dani is capable of.

The next track is titled ‘Darker Water Is’ – a track I am tipping to be the next single of the album. The song has everything from well written lyrics to crushing breakdowns and amazing riffs. The whole song generates excitement towards the listener. After this is the same formula which carries on throughout the album with tracks ‘Another Journey’ and ‘Under The Sun’.

Things get darker with ‘Year Of The Harvest’ which reminds me of death metal routes until the clean vocals start. This shows and allows a great transition of different styles, followed nicely by ‘Garden Of Throns’. After this a welcome break is given to the listener with the light harmony of ‘Devine Breath’ allowing you to soak up everything you’ve just heard, reflecting on which tracks you feel stand out. However you don’t get to mellow as its back to business with ‘Of Glory’ and ‘Last Of The Ice’.

‘Runes’ is a significant step towards metal domination from Bury Tomorrow. It shows the range of talent off perfectly, and allows fans of many genres to connect to them in a way that only Bury Tomorrow offer.

This album will please old Bury Tomorrow fans and bring lots of new ones to the pack. Some may say that the album lacks range in its tracks, focusing on one type of sound. However in doing this the band have shown that they stick to who they are, and keep their sound consistent. For this they stand out from the crowd and are able to showcase their skill and creative talents towards the world.

Bury Tomorrow ‘Runes’ is out May 26th via Nuclear Blast.