Cats In Space Kickstart The Sun 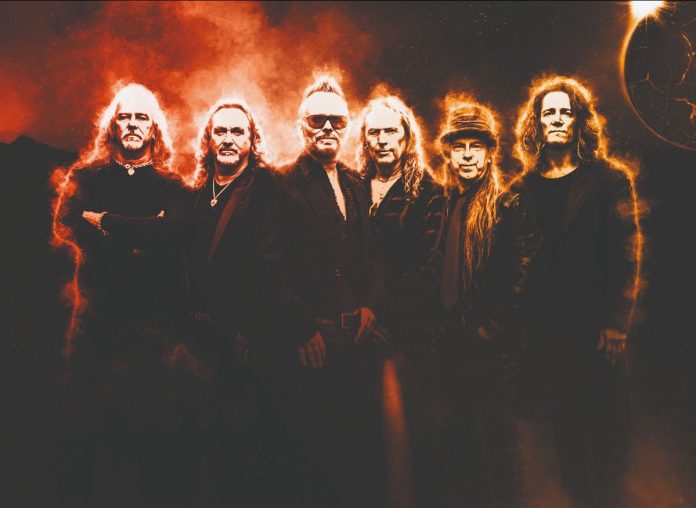 It wouldn’t be unfair to say the members of Cats in Space have all been around the block more than once. Between all six band members, being a bunch of 70’s throwbacks, they’ve amassed a huge amount of experience from playing in a variety of different bands and tribute acts, and the complete list of who they’ve played with, toured with and supported along the way would include names such as Asia, Robin Trower, T’Pau, The Sweet, Ian Gillan, 10CC and Arena, to name a few.

The Cats have been described as sounding like ‘ELO colliding with Queen while 10CC look on from afar.’ They first got together in 2016 after head Catman Greg Hart (a man said to live in ‘the alleyways of the 1970s and who refuses to leave) realised nobody was making our kind of 1970s retro rock any longer, so he recruited a few like-minded friends and the success of their debut album, Too Many Gods, convinced them they were onto something.

A tour opening up for Thunder further convinced them and, since then, they’ve released four further albums, and also a live set, as well as supporting Quo and Purple on tours. Their unashamed mission statement is to take you ‘back to the days of 1970’s classic rock, with loud guitars, keyboards, walls of multi-layered harmonies and catchy choruses.’ And this is an album which ticks every one of their boxes. Greg Hart .. ‘ It’s a real musical chocolate box featuring all the things we’re known for, and it may well be the most expensive album we’ll ever make, but we’re confident everyone will fully appreciate its majesty.’

While the band can certainly play, their hearts are with the great seventies bands like Queen, Styx and Lizzy, who could all play and sing, and one thing which stands out on this album are the harmonies. The short opening track ‘Kickstart the Sun (intro)’ features Acappella harmonies as good as anything Styx or Queen ever came up with. They can also come up with slower-paced, more heartfelt songs like ‘Farewell To The American Dream’ and ‘1,000,000 miles,’ and their single, ‘Teenage Millionaire’, rocks along at a fair pace in the mould of ‘Hologram Man’. However, for this reviewer, on this album, the Cats are at their very best on tracks like opening rocker ‘King of Stars’ and ‘Bootleg Bandoleros,’ both of which have stage fave written all over them. Similarly, the title track ‘Kickstart The Sun’  is a powerful prog-infused track with great guitar work and Styx-like harmonies. ‘Kickstart the Sun (reprise)’ is also a short though a superb closing number, ending the album in style.

Like their previous albums, Kickstart The Sun is riven with their signature power-pop sound, and more than a sprinkling of 70’s infused Pomp rock, but all made to sound relevant. The Cats have gone for broke on this album and it deserves to see them attract a bigger audience.