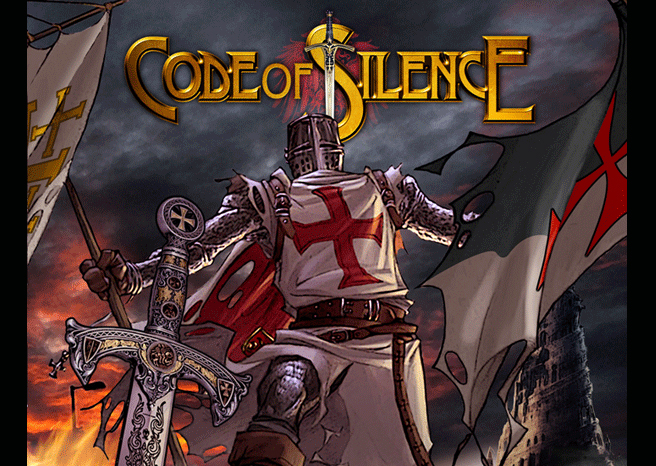 Torn flag held firm in hand a crusader reaches towards what could well be the fabled sword Excalibur in a classy comic book styled cover for Code of Silence’s debut album Dark Skies Over Babylon – it offers a suitable foretaste for the melodic metal offered aurally by this promising new rock band.

Formed in Scotland by the band’s main songwriters, bass player James Murray and producer Paul Logue, they brought in the very audible talents of Ben Randall who won The Most Promising Young Guitarist Award at the 2008 Guitar Idol competition in London when he was just 17, drummer John Clelland, keyboard player Scott McLean and Brazilian-born singer Gus Monsanto who’s made a name for himself playing with European bands like Timo Tolkki’s Revolution Renaissance and Adagio. 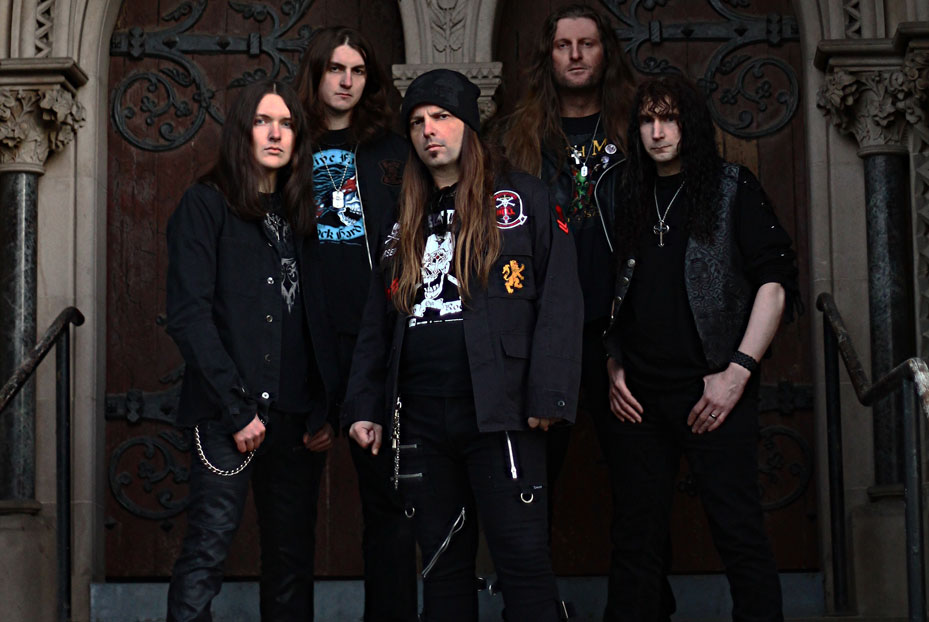 Dark Skies Over Babylon is available from Mausoleum Records, it’s a story-themed song cycle, or rock opera in all but name, about those crusaders who were Knight Templars. It’s kind of ironic that Scottish author Sir Walter Scott was the one who popularised the idea that those Christian knights had gone bad and were to be outlawed forever from Britain in his Ivanhoe novel, whereas in recent years certain Scots are reclaiming those warrior priests as their own: it starts with the unfounded belief that freemasons are descendents of the Knights Templar and what is known as the Scottish Rite form of freemasonry is an uncorrupted version linking back through time, and from there we take extraordinary lexi-links that throw in the conspiracy theories of Rennes-le-Château, and by extension the suggestion that Jesus Christ’s offspring may have survived and became the Merovingian kings of France, as popularised in books like  Baigent, Leigh and Lincoln’s 80s bestseller The Holy Blood & The Holy Grail, and later used as source material for Dan Brown’s The Da Vinci Code fictional thriller and subsequent Hollywood blockbuster movie. Utter codswallop, but it makes for a great romp of an adventure if you let your imagination wander. 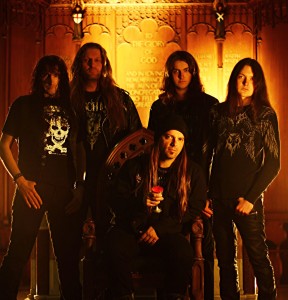 The story per se on Dark Skies Over Babylonis that the Knights Templar are entrusted to keep a code of silence over some dark secret, though who knows what.  Then somehow, something goes wrong, and one of their Order is about to let the cat out among the pigeons … The implication being that he does this for that noblest of virtues: love! One part Ivanhoe, two parts Ridley Scott’s Kingdom of Heaven.

We sidestep visiting Manowar musical territory for the songwriters wrap their tales of daring do, internal conflict, passion for their cause and doubts of conscience with lyrics that don’t always have to be specifically about the Knights Templar cause but to the casual listener could be about boy meets girl situations. And it works.

There’s not a bad song on the album, musically the standard is high, Monsanto has a great set of pipes and there are assorted backing vocals that add to the mix, while Randall really is someone to listen out for – not only are there guitar melody lines aplenty in every song, but strong rocking rhythm ones supporting the sound, and some nice solos to boot. Yes, it’s melodic but it doesn’t wimp out. Standout songs include the totally infectious Sky is Falling Down and the triumphant mini-epic of Knights of the Crimson Cross.

The beauty of this record is that although intended to be heard as a thematic whole it’s the individual songs that count, and they stand up to inspection. Continuing their Knights Templar storyline over future recordings could come to limit Code of Silence’s appeal but on the evidence of Dark Skies Over Babylon they’ve got the collective talent and musical chops to reach for the skies.

Code Of Silence – Sky Is Falling Down: