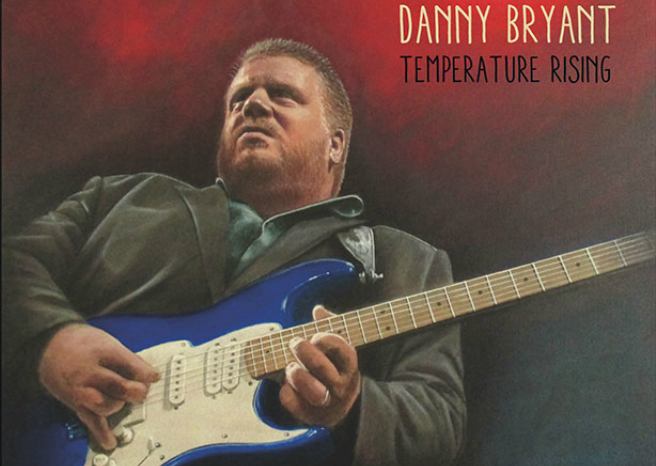 Danny Bryant’s guitar starts wailing straight out the box, his rough breathy voice promising that the woman before him will get the ‘Best of Me’ while panhandling from the blues book of lyrics with tales of full moons, black snakes moaning and spells being a put on him. It’s delivered over a tight bottom end rhythm section with a bolshie riff at the forefront given an overall production sound that’s not unlike 80s era Clapton and when he shoots from the hip for the first of two solos it’s hard not to be impressed.

Born in Royston, England a guitar protégé who’s been leading his own band since he was 18, Bryant’s been mentored by Walter Trout, toured Europe in the company of former Rolling Stones’ guitarist Mick Taylor, Santana, Buddy guy and some other illustrious folk. This old school ethic of constantly touring and recording has seen his audiences grow over the years in a band that used to feature his own father, Ken, on bass (since replaced by Alex Phillips) and Trevor Barr on drums, but it’s since he signed to the Jazzhaus record label that he’s been able to take that all to the next level. “They believe in me, and are willing to invest in me, they care about the music and they care about the artist.” Bryant’s commented. Translating his live appeal onto record hasn’t always been easy, a problem that began to be remedied when he hooked up with producer Richard Hammerton for his last record, Hurricane.

“When we first hooked up two years ago to record Hurricane, Richard’s first question to me was ‘What sort of angle do you want to take? What sort of album do you want to make?’ He wasn’t interested in making a straight ahead generic blues record and neither was I. He was very keen to work the project if we could bring real songs to the table and make a modern produced blues/rock record. Adding in all my influences and creating something that was me. So in a lot of ways recording this album felt like a continuation of those previous sessions. We learned a lot on the last album and we brought that experience to the table for Temperature Rising.”

With songs written on the road during 2013, Bryant brought in songs with some pretty personal lyrics to record the album back in April of this year that he and Hammerton pushed into shape to become the eleven tracks featured on Temperature Rising that is out August in Europe and is due September here in the UK, ready in time to work it out live on tour.

Broadening that blues rock pallet the slower heavy rhythms and slide guitar of ‘Take Me Higher’ veer into Led Zeppelin waters while its overall song structure is pitched at a signpost pointing to Americana in one direction and Southern rock in the other. Rock and roll’s the name of the game in ‘Nothing At All’ featuring Hammerton in full-on Jerry Lee Lewis piano  mode and it has to be said that the various keyboard textures that he adds throughout most of these songs helps embellish the emotional context and themes pursued lyrically, not least with the plaintive love song of ‘Together Through Life’ where Bryant’s Howling Wolf influenced bluster subsides to allow a far more gentler voice time at the microphone – As the song works its way through, one begins to be reminded of classic Rolling Stones slow numbers like ‘Angie’ and ‘Wild Horses’ and then once more Bryant hits a high note that begins a tear-jerking arena-styled solo.

Mainstream blues rock fans will enjoy the aggressive stomp and lyrical menace spat out on ‘Razor Sharp’ where percussive asides, gritty guitar and a saxophone embellish its three chorded attack and the downtown upbeat riff featured in ‘Mystery’ – familiar but never tired when played with gusto – as the guitarist works his lead lines over it playfully. Bryant can keep it simple but in his and Hammerton’s goal to reach beyond the tried and tested, the intent does appear to offer song structures where melodies, chord patterns and musical themes help propel the stories being sung. This is evidenced in ‘Temperature Rising’, the album title track, where it builds from a strummed acoustic guitar base, a melody lead line riff interjecting, a warm organ sound adding depth and mood – One is reminded of Tom Petty’s work, but as if sung with the blue collar frustration of a Bruce Springsteen. Despite which it’s the emotional reading of ‘Time’ with its slow heartbeat bass figure, a piano trickling and rippling in minor key throughout, and Bryant playing the role of guitar-slinger standing alone in the dark and ripping out an extended lyrically emotional phrased solo as the song reaches its climax that holds my interest most.

“The people who come to my shows are predominantly the blues rock crowds and I want the albums to always reflect what we create live,” said Bryant. “Lots of the solos and vocals on this record were first or second takes, that way you keep the spontaneity, that raw edge.” 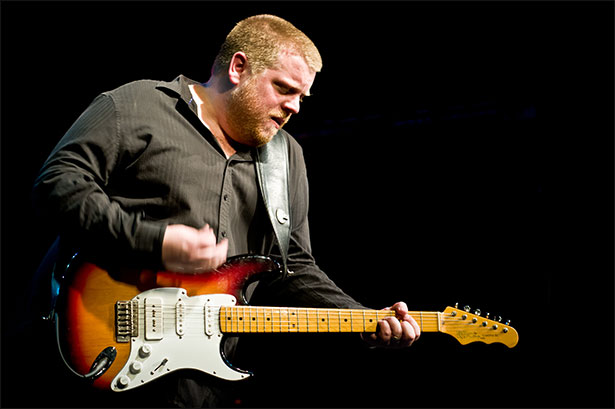 So it is that Temperature Rising ends with a slow burning blues ballad in ‘Guntown’, the first number he actually wrote for the album. “The song came about because of my love for reading blues history books,” Bryant’s said. “Initially the idea came from reading Honey Boy Edwards’ The World Don’t Owe Me Nothing which is all about his travelling around the USA in the 30s, 40s and 50s, living through playing his guitar, hustling and living from day to day. It’s a snap shot into a life that no longer exists.” Perhaps so, but one musicians with their outlaw look on life often return to and that we listeners rarely get tired of hearing. Pinching and pulling on single notes Mark Knopfler style the guitar and organ blend in and out of each other echoing the rarely non-album Deep Purple song ‘When A Blind Man Cries’ while being cradled with a modern fulsome production that does not fade as the guitarist extends the existential wandering of the song’s lyrics into a subtle exposition of tempered fire.

I started this piece by making a comparison to Eric Clapton, and it’s one that worth keeping note of. Clapton’s love of the blues helped launch a thousand other guitarist’s careers, when he went outside that template he may have lost some diehard fans but his fan base extended immensely so that he’s become a household name. I doubt that’s on the cards anytime time soon for any other new hot shot guitarist, but with Temperature Rising Danny Bryant has delivered an album of broad ranging songs that could get him a hearing outside the already extensive blues rock circuit – At least two could appear on Radio 2 and still be held up as credible. And even if one ignores that are indeed some fine tunes on this record it’s damn hard not to listen and pay attention when Bryant tears into one of his piercing emotionally expressive solos. For a big man he’s got one sweet sound.