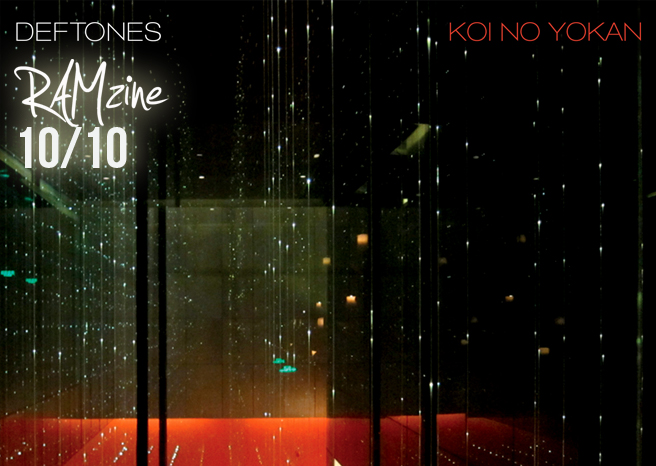 Deftones returned, for all intents and purposes, with their breathtakingly brilliant 2010 release Diamond Eyes. Having released two relatively sub-par albums in the period between this and the now modern classic White Pony, some had begun wondering if the band would ever release another truly great album again. Building on the successes of Diamond Eyes, Deftones returned to the studio in 2012 and came out of the other end with the magnificent Koi No Yokan as the fruits of their labors Combining all of the strongest elements of the bands now powerful arsenal and using their maturity to their advantage, Koi No Yokan has the potential so sit right alongside previous offerings Adrenaline and White Pony as one of Deftones finest moments.

The first thing that’s noticed as opener Swerve City kicks things off is how open and energetic everything sounds. It creates a feeling of immense space and atmosphere within the song that is simply sublime. Up tempo and light, it immediately brings to mind songs such as Knife Party from White Pony or Rocket Skates from Diamond Eyes. Another aspect to the bands performance that is readily apparent is how fantastic each members performance sounds, not only from a production standpoint. Vocalist Chino has arguably never sounded better. His range and style (two things that have always been a treat for listeners in both a recorded and live setting) are clearly areas that have been really worked on and honed for this album. Alongside this, drummer Abe Cunningham sounds more powerful than ever and works fantastically with current bass player Sergio Vega to create a brilliantly strong and watertight rhythm section. Guitarist Stephen Carpenter’s switch from a 7 string to an 8 string guitar has had a sizable effect on his parts also. The guitar lines sound incredible! Not only are they indisputably well written and executed, the way they are produced continue to add layer after layer of power and atmosphere that are honestly and truly unparalleled. The low end is as beefy as they come but never distorts or overpowers the mid and high end parts that combine to make that signature Deftones sound. Second song Romantic Dreams slows the pace a little while building on the solid foundation of atmosphere and ‘space’ laid down in the previous song. With the electronic work of Frank Delgano wound tighter to the core of the bands sound than previous offerings , this is a song that moves things in a direction that is both more familiar yet still slightly alien. There is an element of unpredictability to these songs that keeps them feeling completely fresh throughout every single listen (at the time of writing the counter is at approx 20 listens already!) Following Romantic Dreams is the song that was the first to be released prior to the album, Leathers. Released as a free download via the bands website in the weeks before the release of Koi No Yokan, it features some of the finest moments on the album. Chugging guitars and twisted timings give way to a chorus that is nothing but huge, plain and simple. Accompanying sections of more syncopated drum/cymbal work reveal some of the albums darker side properly for the first time as well as the first of those signature Chino screams we have all grown to love so so much. Ending as quickly as it began, Leathers leads almost seamlessly into the disjointed clapping that signals the opening of Poltergeist. Diving deeper into the more abstract time signatures, Poltergeist has a feel not too dissimilar to Elite from the White Pony album. This is not to say that the songs are in any way the same but more that the guitar work draws more on the style of White Pony. Rolling low end riffs give way to hugely uplifting choruses and sweeping middle sections that will excite listeners immensely while still hitting with the force of a runaway train. 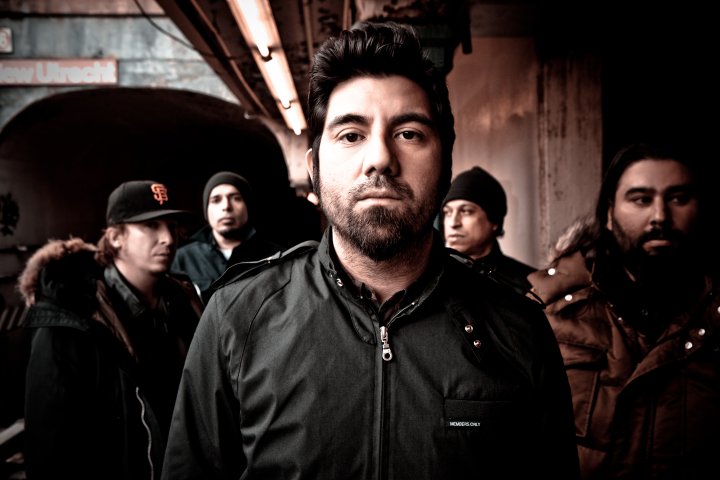 Entombed is the first time on this album we are properly exposed to the more mellow side of the band that we have all come to know and love. Verses filled with simple guitar lines and electronic drums and keyboards lead superbly into giant choruses that lift the song to a level that evokes emotion in a way that is unparalleled by anyone else. Dillinger Escape Plan vocalist Greg Puciato summed it up perfectly when talking about Entombed by saying “Its nice to be surprised even when you’re expecting something to be good.” This is a truly beautiful song that is composed and performed as close to perfectly as you are likely to get. Graphic Nature, Tempest, Gauze, Rosemary and Goon Squad are all songs that see a return to the more familiar Deftones stomping ground, however. Titanic guitar and vocal lines weave gorgeously throughout these songs with an originality and impact that is near impossible to ignore while the rhythm section of Cunningham and Vega provide a solid foundation with Cunningham leading one section into another with impeccable ease and impact. This is probably most apparent in Gauze. Quasi-tribal drums and guitars connect to verses and choruses seamlessly and with a devastating impact. The electronic work of Delgano here is particularly effective with samples and other tools leaving a footprint that help to turn things ever so slightly closer to the darker side of the Deftones sound. Album closer What Happened To You? manages to encompass every aspect of the rest of the album in an utterly fantastic way. Opening with syncopated, hushed drums and beautifully executed guitars it builds on the base laid previously by Entombed. As the hugely evocative choruses open up they lift Koi No Yokan to a truly epic level of atmosphere. Layered vocals combine perfectly with the instrumental parts as they sway between sections. It is a song that is in no way traditionally ‘heavy’ but leaves an impression like no other song this album and it the perfect way to cement Deftones triumphant return to form over these last two albums.

If you are a fan of Deftones prior to this album then this is almost certainly something you will enjoy immensely, even if you are one of the ‘purists’ who believe the bands best work was pre White Pony. Similarly if you have previously not heard any of the bands work, this will serve as a fantastic and accurate representation of everything the band has achieved over the past seventeen years. This is an album that is nothing short of sublime and shows exactly how brilliant Deftones can be when they are at their most focused. Koi No Yokan is quite possibly their best album since White Pony and a strong contender for album of the year in anyone’s book.