DVD Review: Thunder – All You Can Eat 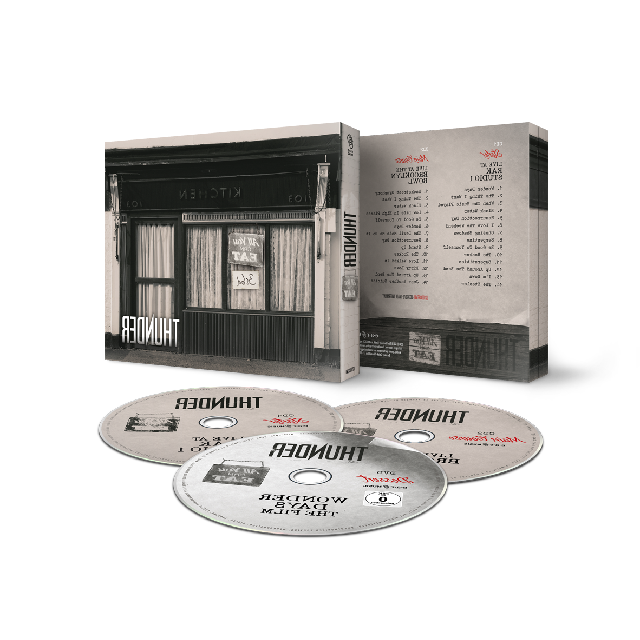 This album set is released as a full buffet for both new and existing Thunder fans. For those new to the Thunder fanset these disks tell them exactly what the band is all about while those who are already fans get to hear some familiar sounds and visions.
The three disks are put out as ‘Starter’, ‘Main Course’ and ‘Dessert’ and contain exclusively live content as the follow up to the 2015 release of Wonder Days, the bands 10th studio album.
Disk 1, the ‘Starter’, is a live session at the RAK Studios, no mixing, no messing, just played and recorded and it takes the format of a typical Thunder gig supplying a heady mix of original material with a scattering of well-known singalong covers. Fourteen brilliant songs, superbly recorded but…..none of the atmosphere of a true live album was there. No audience, no crowd banter from Danny Bowes, this sounds like any other studio recording. Don’t get me wrong, there’s nothing wrong with that, but it could have done with some band chatter at the very least between songs to get that live feeling over to the listener.
Disk 2, the Main Course, is a recording of the live show at the Brooklyn Bowl, London and which I was lucky enough to attend. Now this is Thunder live, good songs ,originals and covers, plus the chit chat that Danny Bowes is famous for and, of course, the crowd’s reactions, the cheers, the audience participation. This is what makes a live album live, and believe me this album is LIVE. This course has half a dozen songs in common with the Starter but the difference an audience makes can’t be underestimated.
Disk 3, the Dessert, is a DVD showing the Wonder Days Film, documenting the recording of Wonder Days, plus some bonus footage of the live shows at Loud Park, Japan, the RAK Studios recording and the Brooklyn Bowl gig. The Wonder Days Film shows interviews with the band members and their feelings following the most recent re-launch of the band, the events surrounding Ben Matthews’ diagnosis of having cancer and the decision to write the new album. It provides an interesting insight into the workings of the band and how they dealt with Bens illness.The remaining content is all live material taken from the RAK Studios recording and the shows at Loud Park, Japan and the Brooklyn Bowl, London.
If you’re a Thunder fan this is a great addition to your album collection because it shows some very personal stuff fans wouldn’t otherwise see. If you’re new to Thunder then this is the perfect introduction to the band, its music and how it is created.
Despite the RAK Studios recording lacking any atmosphere whatsoever the DVD content is otherwise bang on target for all fans, new and old. This band have a bond with their audience like no other band has and it’s like every member of the audience is a friend to every member of the band. The songwriting skills of Luke Morley are unquestionably good and Danny Bowes is a fantastic front man, his voice is as good as ever, the only limitation is his two-fisted ‘dad dancing’ on stage; he might be full of energy, but he’s no dancer. The rest of the band contribute to the whole and that whole is a source of endless entertainment.