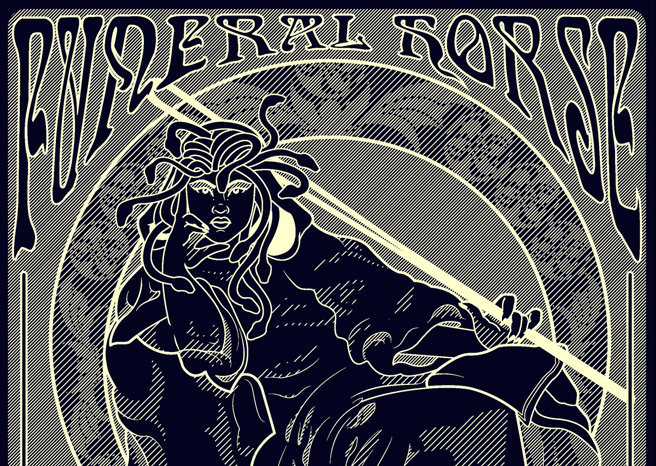 333 copies – hand numbered – multi-coloured vinyl. This first edition is released by Artificial Head Records. It should be emphasized that this artefact of musical importance should be in your collection and played/abused as often as possible. You should also know that the vinyl mix is different from the online version.

Here is our track-by-track of Funeral Horse ‘Sinister Rites of the Master’.

Until the last Nations Falls

Slowly it unravels with sinister intrigue. In a sonic haze of distorted energy it holds a lot of tempting grooves and the vocal is clean however it holds its own potency. The guitars are its redeeming feature though with a myriad of satisfying and rhythmic output.

Amputate the hands of Thieves

Along the same vein of sinister with a hazy distortion it broods into a maelstrom of delicious grooves but the vocal slightly melts into it so it tends to lose a little power. 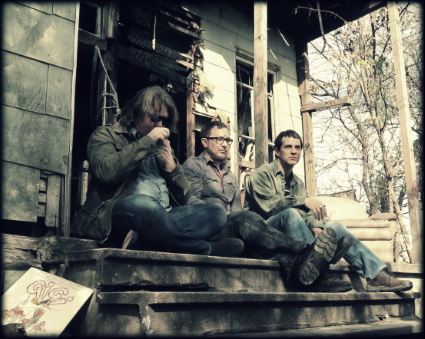 This track snakes into a meandering and stalking sombre provocation and therefore, very doom laden. However it is highly intriguing and the harmonica gives depth to an otherwise less intense track.

Bristles with a high octane flurries, bringing with it scorching rhythms and groove, although as it furthers it just doesn’t quite ignite and goes off the boil somewhat, which is a real shame as I thought this track was shaping up really well.

I hear the Devil calling me

Barely audible comes a droning sound and then a female vocal starts up, which has me somewhat confused. Not even sure if this is the same band I am listening to or what? Not sure what to make of this?

Good title, and sounds like someone is getting stoned due to the heavy breathing! Definitely more power has been pumped into its girders and it sounds promising. Its melodic rhythms are heavily laced with a stoner groove and this clearly hits the mark, finally!

Swaggering with a slow rhythm this track plods – however again the guitar saves the day with blistering heavy riffs.

I was expecting a lot more consistency as usually stoner metal delivers blazing passages of heaviness whereas Funeral Horse just seem to have played safe in a way and in my opinion not gone the whole hog. There are a few good bits to get your teeth into, but it is a bit spasmodic. Occasionally, the tracks do portray a certain flourish of energy but it is short lived, which is a real shame.

‘Stoned and Furious’ has to be my favourite track on this meagre seven track album for its consistency to actually deliver all the way through.

Still not sure what to make of ‘I hear the devil calling me’ it does sound very out of place on the album for sure. Is this Funeral Horse trying to squeeze in some diversity perhaps? So a bit of a damp squib that occasionally pops to unleash a few good riffs and then dies down again.

Funeral Horse ‘Sinister Rites of the Master’ is doe out  via Artificial Head Records on 11th August 2014.

Until the last Nations Falls
Amputate the hands of Thieves
Communist’s Blues
Executioner of Kings
I hear the Devil calling me
Stoned and Furious
Working Man
Share
Facebook
Twitter
Pinterest
Linkedin
Email
Print
Mix
Previous articleButserfest announces Create to Inspire, Saint[the]Sinner and When We Were Wolves
Next articleThe Blackout at Liverpool 02 Academy