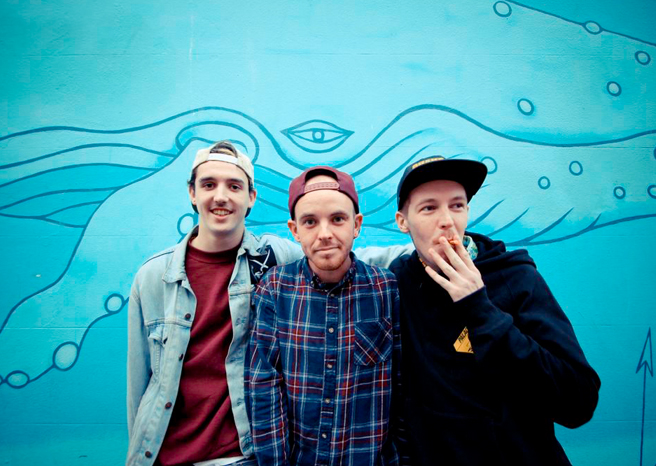 Hometown shows are normally a cause for a party and Gnarwolves certainly know how to put on a party. On Friday 20th December, Brighton skate punk trio Gnarwolves played their final show on their headline tour at The Haunt.

The night started off with Brighton’s newest punk sensations, His and Hers. Although His and Hers sound isn’t too far off of Nai Harvest, whilst having their own individual sound, it was noticeable that the majority of the crowd were not too interested in the new pop punk sound that His and Hers were offering. Even without knowing any of the bands song, and failing to listen to them before hand, His and Hers offered some fresh songs that weren’t that hard to bob your head along to and to get into.

Shortly following His and Her were the alternate/punk foursome Hindsights. For the second act to take to the stage the Berkshire quartet drew quite an impressive crowd. The fuzzy and shouty mix of punk, emo and post hardcore proved to be a crowd favourite, and although their music is similar to Gnarwolves, it was evident that the passion that runs through their lyrics was one that was not matched the entire night. Whilst playing some older songs, Hindsights mainly played songs off of their new EP ‘The Thoughts That Weigh Me Down’. Hindsights were without a doubt my favourite band of the night, only slightly over taking Gnarwolves.

Nai Harvest were the next band to take centre stage at The Haunt. It was obvious that the punk/indie duo were highly anticipated, with the crowd and the first stage diver of the night making an appearance. With the Sheffield boys, telling the security guards that they weren’t needed, Nai Harvest played through their set with confidence and ease. By fans shouting back the lyrics with all their might it was clear that Nai Harvest were a crowd favourite. Their set list for the night consisted of some of their older songs and some new ones. Nai Harvest certainly did not disappoint.

Hitting the stage with their massive hit History Is Bunk ,off of their album CRU, it’s no mistake that Gnarwolves were the crowd favourite of the night, let alone one of the UKs most relevant and up and coming punk rock groups. Its safe to say The Haunt was brought to the ground by stage divers from the very first song History Is Bunk, with fans spilling onto the front of the stage its obvious that this show had been eagerly awaited. With Thoms distinct vocals and fast guitar matched with Charlies equally as raw and distinctive vocals and Max slaying the drums, The Haunt didn’t stand a chance. The Brighton boys certainly know how to put on an A class act.

The first stage diver of Gnarwolves set sets off a tidal wave of sweaty teenage bodies that are climbing and flying throughout their entire set. With the setlist for the night packed filled with of songs off of all three previous albums, as well as three new songs, the crowd were most definitely in for a treat.

One thing that I’ve noticed about Gnarwolves gigs is how my much the crowd get involved, whether its through crowd surfing, stage diving, amp climbing or taking the mic off of the band themselves the crowd are always involved.  The crowd get wholly involved with the band and that’s its obvious that this is how the band likes it. Gnarwolves certainly made a connection with fans new, and old.

The only bad thing about this gig is that Gnarwolves, who were headlining, only played for around 40 minutes but it didn’t take away from them banging out song after song to an amazing response each time. With the crowd singing back almost as loud as the amps its clear that Gnarwolves are masters at writing remarkable punk songs about significant things in peoples lives that they can easily relate to making the shows even more wild.