Graham Bonnet Band – Meanwhile Back In The Garage

Like most rock fans, Bonnet came to my attention when this remarkable voice appeared on the 1979 Rainbow album Down To Earth. Now in his 70s, he unleashes a new album called Meanwhile Back In The Garage. Combined with a live DVD, these new recordings feature that still strong voice, along with his partner Beth-Ami Heavenstone on bass, Alacatraz keysman Jimmy Waldo, Joey Tafolla on guitar (except on Livin’ in Suspicion which has Kurt James) and Mark Benquechea on drums. 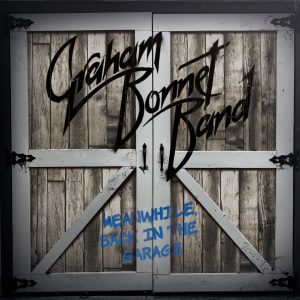 This is a damned potent album, very close to the feel and atmosphere of the first Alcatraz album: in fact, sometimes it could be Malmsteen playing, particularly on the opening title track. Livin’ In Suspicion was written by Russ Ballard, as were a couple of Rainbow hits as well as Bonnet solo tracks. It is, as ever, a strong sing-long-chorus but with acres of space for one of the better guitar solos. ‘Long Island Tea’ is a sub-5-minute epic with a heavy riff, synth solo and a superb vocal. ‘The House’ would have fit beautifully on Assault Attack. ‘Man On The Corner’ (about an ex-military man now down on his luck) starts slowly then hits a frenetic pace. ‘We Don’t Need Another Hero’ is a slowish, but still heavy song and shows Bonnet’s lower register for a change. Final track, ‘The Crying Chair‘, is a great way to close the studio part of this release.

Bonnet’s lyrics always tell a tale; here we get social commentary covering incest, the state of America today, the fear of death. Put those together with a heavy as hell band, topped with one of the voices of rock and you get 13 new tracks of enormous power and complexity which just keep getting better on repeated listens. Add in the bonus live DVD and this is an essential package.