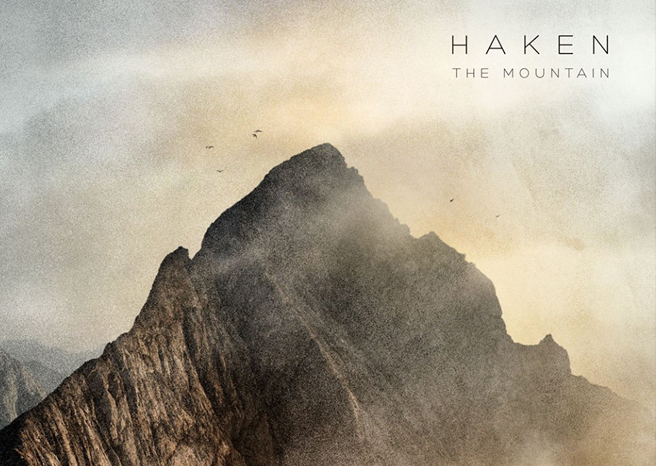 Haken were once described (by Classic Rock presents Prog Magazine) as: “Prodigiously talented youths that will benefit prog.” And it appears that they have now repaid that complement, by creating a masterpiece that can be enjoyed by all.

After Haken’s début album ‘Aquarius’ enjoyed international release in 2010, the band began to spread their music across Europe , and started to earn themselves an enviable reputation as commanding musicians and exciting live artists. ‘Visions’ saw worldwide release in October 2011, and this sparked up even more interest in the band, adding to the fast-growing resurgence of interest in British prog-rock. And during 2013, while writing and recording their third album,  ‘The Mountain’, Haken managed to find time to tour with the Finnish Prog maestros, The Von Hertzen Brothers, as well as playing two memorable sets at the UK’s top prog festivals: HRH Prog and Celebr8.2. (Both witnessed by RAMzine).

The London-based six-piece now celebrate joining forces with InsideOut Music for the release of their fascinating new album ‘The Mountain’. The disc was mixed and mastered by the legendary Jens Bogren at Fascination Street Studios (the studio chosen by Opeth, Devin Townsend & Symphony X) Many of us have tried at least one mountain walk in our lives. For most of us, the experience was probably too painful, moist and defeating to have been enjoyable. But it may have been exhilarating too. It’s often an important moment in our lives. To climb. That’s when we are most aware of our own fragility. And, on the climb, we can begin to re-evaluate our real purpose here. The experience can provide us with a clear head. Allowing us clarity to think through issues. And allowing us time to restore what is truly valuable for us. A walk in the mountains can be very spiritual. But for most of us, serious rock craft is never going to be a passion.  It will remain a cold and distant memory. Or an entry on a bucket list.

This new Haken album starts with some gentle slopes for the timid souls that we are. ‘The Path’ takes us, eagerly, onto the green foothills. It leads us, hurriedly, onto lumpy terrain. But we are never too far from refuge. We can wonder in awe at what might await us at higher altitudes. But we know we are in safe hands. As we scale ever higher, we start to feel colder and less comfortable. But even at this level, the way is forgiving and kind. This track is just a warm-up to what lies ahead. And it will lead us to ask whether ‘The Mountain’ will turn into a passion for us.

The next track ‘Atlas Stone’ (meaning: five stones of increasing weight) begins fluidly – which is unexpected in such a rocky terrain. But on mountain walks there are often pools and cascades. A thicket of brush-like guitar suddenly explodes out of the growing fog – and a sensuous synth takes us away – into a dreamscape of golden hooks and aural mists. From here, we gaze up at the eagle’s domain – where time passes so slowly that, for a man, it just stands still. And there is a surprise in that underbrush. A jazzy organ starts to titillate your fancy. The resulting tangle might remind you of Jack McDuff’s ‘Vas Dis’ last heard on the Wishbone Ash 1971 album ‘Pilgrimage’.

Perhaps ‘Cockroach King’ doesn’t really fit in the with the overall ‘Mountain’ theme. It’s nonsensical and slightly absurd, in way that’s refreshing and squelchy. But maybe it’s what’s going on in your mind, as you trudge steadily onwards and upwards. It‘s like marching on a bed of mulch after the heavy rain. There are echoes of 1970 Focus (Focus Plays Focus) in there, and certainly some of the more way-out Jon Anderson material too. At times this track has an operatic and regal nature to it. And at these moments, it doesn’t quite sit comfortably with all the pogo bounces and kindergarten farts that lace much of the soundscape. But that’s all part of the fun.

Often, on a climb, the mountaineer finds piles of stones by the side of his trail. Sometimes these are just marker posts. But at other times, they have a darker and more significant meaning. They are memorials. They remind us of the weakness of man. The mortality that lies within us. The meaningless of all our efforts. They help to remind us that ‘The Mountain’ is not a friend. She’s a murderess. She cannot be tamed or overwhelmed. We are merely skin and bones , an animal, pitted against a sheer unyielding mass. And with ‘In Memoriam’ we get that same stern, numb feeling. Deep down in the pit of our stomachs. The same feeling that climbers must get when they come across the memorial markers. The vocals are categorically pronounced against a sheer cliff-face of sounds. These will knock against your face, like a sudden rock fall, they threaten to push you from your clasp-hold. Vertiginous guitars constantly nag at your fingertips, with a surprisingly cold bitterness.

A beautifully haunting choral chant greets us on ‘Because Its There’. The vocal effects are reminiscent of May’s ‘The Prophet’s Song’ on Queen’s ‘A Night at the Opera’ (1975.) And Mallory probably never even uttered his most famous quote … After being asked why he wanted to climb Mount Everest … He allegedly responded with the three most famous words in mountaineering : “Because it’s there.”

‘Falling Back To Earth’ is whispering and shaking. Perhaps the climber gets to a point on every climb when he yearns for the angels to pluck him up and put him safely back onto level ground. Ross Jennings’ vocals are spirited and fluent. They certainly hit the higher octaves with astonishing clarity and accuracy. This track also has some searing guitar-work and some sonically complicated keyboards. It will amaze and tantalize the listener in equal measure. The generous melodic excursions will almost certainly remind any seasoned prog-rock audience of ‘Yes’. It’s a stand-out track.

‘As Death Embraces’ is a melancholy moment. The wickedly dangerous wind laps out across the jagged outcrops like a lashing whip. This eloquent vocal piece will help the listener rush into the safety of its crevices to flee the harmful bite. Then ‘Pareidolia’ (meaning: seeing hidden messages in shapes) rattles into view. Don’t forget that the mountains are mystical places too. They are not just there just for the sport. For centuries, mystics, disciples and prophets sought the highest peaks to get closer to their chosen deities. The clarity of vision. The lack of obstruction. The new set of priorities. The pressure variations. These all helped the seer to reach a literal ‘high’. This song whispers to you …  like air-words in your inner ear. It weaves around you like an Eastern snake dance. And when you listen closely – you can make out new forms and new meanings – from each undulation and outcrop. When asked why he wanted to climb – maybe Mallory should have said – “To get closer to Heaven.” That would have been the canny answer.

‘Somebody’ completes this sensational album. This song starts like another ‘Wishbone Ash’ sounding number. Slightly folksy. With small trickles of silvery sound that tremble like delicate thimbles set spinning on long-headed needles. This song throws a protective wing of feathers across the forehead. And then places you under its spell. So you’ll slumber under the shielded guard. Just another soft body. Mortal and spent. Beside the brutal shadow of the mountain.

Haken have taken all of the essential elements from the history progressive rock – the favourite things that you and I have discovered over the last 45 years – and they have created a master-brew of intoxicating sounds from this elixir.  It is abundant with ever-changing ideas, rhythms in constant motion and alternating highs and lows. This is a major achievement. An amazing album, it’s  head and shoulders above anything else in the genre right now.

A momentous piece of work. Beautiful and unifying.