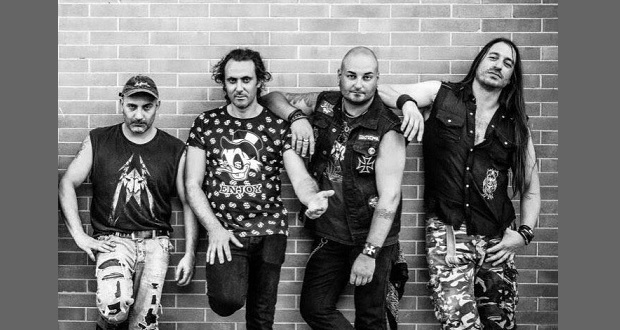 Many bands earn their spurs playing covers in venues of, shall we say, questionable suitability. Been there, done that back in ’79 at Tudhoe Working Men’s Club. A similar path, but in Italy, was the starting point for Half-Life except for this band: formed in 2015 by Andrea Lippi (vocals), Guerrino Mattioni (guitar) and Manolo Cogoni (drums) and Gianluca Olraitz Jack (bass). Who has moved on from playing covers of bands like Iron Maiden, Judas Priest, Helloween and Saxon and began writing original songs and have now produced an EP called, I’ve Got to Survive. They stay true to their roots and, on the four tracks here, they show that they have the mettle to make their mark.

Opening with the title track, we get a spoken intro (in Italian) before the main riff hits like a train -it’s NWOBHM incarnate as the screams and rapid-fire drums and bass follow the guitar. The bridge leads to a twin guitar sequence that works very well and follows a Priest/Maiden style pattern. ‘Killing Words’ shows a better idea of their compositional skills. Even though the Painkiller-era Priest themes are there, this is a quality slice of Heavy Metal. ‘Only Shadows’ brings what sounds like a monastery choir to bear over a synth and then a short orchestral phrase heralds the staccato riff and a complex drum pattern that combine to make a strong Maiden/Metallica kind of song.

The final track, ‘The Judgement’ has more spoken word. Mixed radio broadcasts in different languages before the hefty riff and, with the monks back again, it is the best of the bunch. The vocals are less strained sounding and the varying guitar patterns make it a really enjoyable bit of metal.

Obviously, this young group are still finding their feet and developing their own identity but this is a very promising start and is better than some established bands are putting out these days.