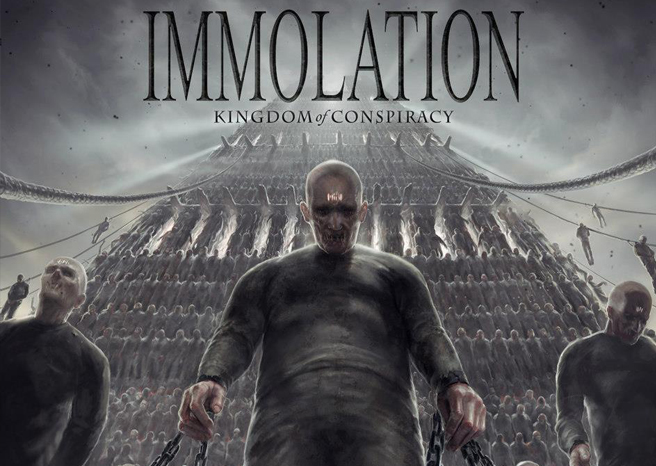 Ripples with muscular prowess as it brings forth a myriad of powerful infusions of down-right raw brutality in rhythmic form.  The vocals, hooks and melodic content really severs the jugular with rip roaring abandon. That guitar really works its magic on the aural too!

More overwhelming power surges forth and wraps itself around your head in mesmerizing form and what ensues is just a brooding onslaught of sickly and putrid rasping that is crushingly superb! Commanding riffs punch with rapid force and devilishly brutal to boot!

Imposing and abrasive the squeak of the vibrant guitar takes hold of the listener. Slow and deliberate it literally invites you with tempting ease as the flurries of beats hit you one by one like a machine gun. This track has a nice texture mixed with aggressive flavour.

The building rhythms simply plough through your brain like a tractor on open fertile ground. Battling through the sinewy rhythms that loom meaningfully through a barrage of blast beats that kick you to death.  Vocally huge and imposing with a commanding virtue and possesses a nice slow swagger of rigidity.

Deliberate and intense this gallops into life and leaves a gnarly path for you to follow. Rampant and repugnant its scathing rhythms will burn and sizzle in extreme measures as it builds to a high frenzy.  Compulsive listening!

Continuing the brutality this track twists and burrows into a murky depth comes up for air and crashes back through thick waves of extreme intensity. Assisted by deep resonating growls of pure hatred it will rip you apart. Fierce riffs will alleviate you of your audial canal and send you into a deep gaping chasm of no return.

Shrill and striking guitar opens this track with a plundering beat in hot pursuit and closely followed by a damming vocal that scourges the depths of depravity. With immense conviction this track develops into a monster of driving riffs and immeasurable rhythms that in turn brings a new release for pent up aggression or it just may fuel it – I will bet on the latter!

A spectacle of Lies

The prime issue here is melody that pursues a rich dark gruff vocal bathed in temptuous rhythms of harsh unrelenting power. The brawling intensity continues in a solid guitar riff format that will hit you forcibly in the guts.

The presence of more “expected” pleasure as the track swarms viciously around your head and attacks with a deadly sting and is colossal. Drenched in highly invigorating rhythms a plenty the onslaught is dramatic and provocative and delves further into a maelstrom of unadulterated ferocity.

All that awaits us

Voracious and compelling with suffocating rhythms that compel with eager anticipation – I don’t think I have come up for air yet! It is indeed an excellent release to rid yourself of any harbouring maliciousness as it eats away at your vicious anger.

Overall ‘Kingdom of Conspiracy’ is a strong 10/10. If you are feeling angry when listening to this it may fuel the blood more so, but it also contains therapeutic qualities.  Damming and superb in all its glory from start to finish.  But being a band with over 94,000 likes on Facebook and being on Nuclear Blast Records we did not expect any less than perfection and that is exactly what we got!

Immolations ‘Kingdom of Conspiracy’ is out via Nuclear Blast Records on 13th May 2013.