Kerrang! Tour: Beartooth, Bury Tomorrow, Young guns, We Are In The Crowd, and Don Broco 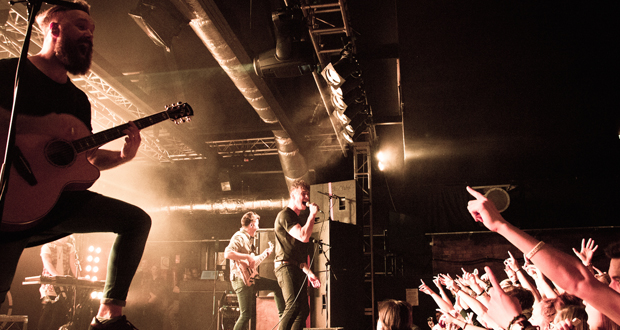 This has been an unforgettable night! Five fantastic bands – it’s a mad mix of 2015’s hottest bands on the scene: Beartooth, Bury Tomorrow, Young guns, We Are In The Crowd and Don Broco.

Beartooth are the first to play, kicking things into full swing. Though it’s a short set, they were a mega opener. When they played second track, ‘In Between’, the crowd lost it and the mosh pits started to emerge. It got to the point when the lights came on, (as it became so hot) the ceiling was dripping – the atmosphere was insane. They finish on ‘Body Bag’, and I am left wondering were I can see them next! Luckily they have just announced a headline tour this May 2015, kicking off in Reading on the 18th! In addition to this, they will they be performing at this years Slam Dunk Festival (Leeds, Hatfield and Wolverhampton) AND they will also be making their Download Festival debut!

We caught up with Baretooth guitarist Taylor Lumley prior to the Kerrang! tour show. Watch the interview here:

Bury Tomorrow kicked it off again, exactly where Beartooth left, and straight into action with their first song ‘Man on fire’. Vocalist Danny says “Put your hands to the person next to you, don’t give a f*ck if you don’t know them, get off the ground, all of you!!” As usual the crowd do as they are told ready for ‘Of Glory’.

In true honorable fashion Danny tells the crowd “We are here to make sure you have a good time and make sure the ticket money is well spent”, BT then go into the formidable ‘Watcher‘ –  the heavy metal intensifies! In the good spirit of metal a marvelous pit has formed. Tally Ho boys and girls! “I suggest you traverse into all forms of music, rock, pop and metal”. BT have always allowed fans to be who they are, they promote being allowed to do  and like what you want – we like this at RAMzine! Death to any elitist bullsh*t!

Now this bit made me laugh!..

But wait there’s more: “Do you know what I hate?” says Danny, “When some bands charge to meet and greet… If you see us in the street, ignore the barrier just come over and say Hi” -this is another reason why we love BT, they make sure that all their fans know their is no divide, nobody is superior, more of a family.

Brock from 36 Crazyfists, also had some interesting points on this subject recently. He has a slightly counter argument, and believes that bands need to think of inventive ways to make money these days, although he still doesn’t agree bands should charge to simply just meet a band. Read his ideas and the full interview here.

BT finish on ‘Lionheart‘ and the crowd is just insane!

Young Guns had a short set of just three songs, but my god they smashed it! It was a complete u-turn from the first two acts. Think heavy pit metal to merry rock! These chaps don’t take it seriously! Running, jumping and dancing around the stage not giving a hoot, having a good laugh. The crowd are going nuts along with them, belting along to the tracks and dancing like madhouses. They played ‘I Want Out’, ‘Speaking On Tongues’ and ‘Bones‘. Fantastic choices.

We Are In The Crowd carry on the good spirit, after a quiet intro they come on stage and without any doubt begin to play! Starting off playing ‘The Best Thing’, and then ‘Manners‘ it really did kick things into full swing! Vocalist, Taylor tells the crowd “It’s our first time in Liverpool, let me see those phones lights up, more light!”, you guessed it ‘Lights Out’ is the next track!

Suddenly a wild acoustic guitar appears, ‘The Worst Thing About Me’ is played, the place slows down becomes a bit more chilled and then Bam! Back into the rock groove. “Liverpool, Kiss me” says Taylor, okay then! ‘Kiss Me Again’ is next! To end this great set, ‘Rumour Mill’ is played, everyone is going nuts, such a great night! How can it get better!?

Don Broco – Holy Sh*t! I think best describes it. I have no other way to word it. As soon as the second song ‘Yeah Man’ begins, everyone…I mean everyone went insane!

The third song is ‘Actors‘. Vocalist, Rob, warms up each side of the crowd to sing loud ready for the song. To top this off ‘Fire!’ – A brand spanking new track is played!

‘Automatic’, another track! They sure are spoiling us with new tracks! “Everyone jump, JUMP! JUMP!!”, bunny rabbit mode active boing boing!

Next the band play ‘Fancy Dress’, Rob addresses the crowd, looking up and down at everyone he says; “This song goes out to everyone coming to multiple tours. I recognise a few of you, you two in the front, I’ve seen you at the Manchester, and you’ve also been to Newcastle too? Proper romantic weekend I guess, everyone give a big round of applause and cheer for this couple!!”

“Alright Liverpool I want to see the biggest pit going okay!!” continues Rob, and true to form it’s massive, and it’s getting so hot sweaty in here.

“Okay, I know we’ve been quiet for a while with new stuff, but just to let you know we are working on a new album!”. Don Broco play a few teasers, and let us tell you – it’s going to be awesome! We can’t wait for this next release.

“Are you ready to go wild?”, Dani from Bury Tomorrow pops up to help sing ‘Thug Workout‘. “Split up, I want the middle clear everyone back up to walls, when I say go I want to see the biggest pit going, bigger than the last one.”

And sadly before we even know it, it’s all come to a close. Five awesome bands in one hot awesome stage! It has been a mental night and im sure it’s going to be an unforgettable one.