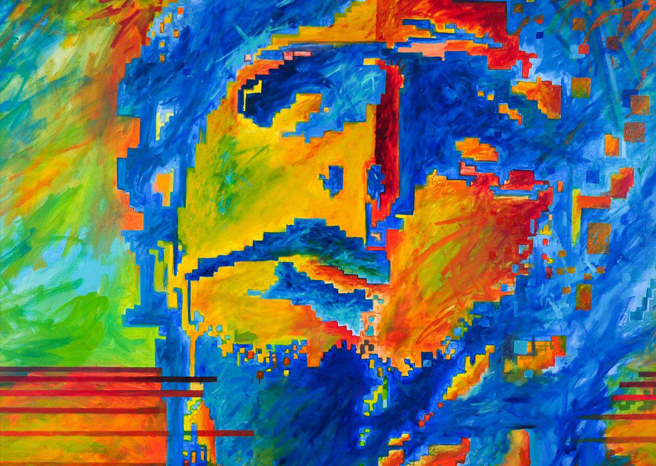 Names like Mogwai and The Mars Volta are offered as musical signposts for the aural outpourings from Houston, Texas four-piece collective Liquid Casing and there’s certainly an experimental progressive flow at work on A Separate/Divide, albeit jazzier like the waves of a tide ebbing to and fro, sometimes gently splashing collectively towards the shore at other crashing violently against each other.

A Path of Footprints Forged in the Midnight Sun opens with a throbbing sub-metal riff to be followed by a fuzz-echoed guitar line and vocals all reminiscent of early Hawkwind before a more psychedelic be-bop Gong style arrangement comes into play. All very early 70s hippy music but played aggressively. Next up, instrumental Alambrista delivers in a similar vein, sounds fading in and out, picking up a brisk pace with drums crashing and accentuating the work as saxophone soloing leads us down ever more interesting musical avenues; far from easy  listening at times, but expressive and more akin to the work of Van Der Graaf Generator.

Fingerprint Armada shifts focus moving from a distorted punk guitar and bass riff to Floydian chords as lo-fi synthesiser sounds whistle about underneath, the vocals not really pushing the song in any direction and the overall effect being a good idea not completed. The cycling guitar melody and rumbling bass that is the foundation of The Line Which Divides is a slow processional march that once again allows the saxophonist, aided by keyboards, to bark and howl in a free jazz format, while the following For a Memory Erased is altogether more jazz fusion orientated, like the 70s work of John McLaughlin or Tommy Bolin but ironically without the guitar solos, and again the vocals are not strong but it seems it’s something about the feel of the moment that Liquid Casing are trying to capture in a recorded format. 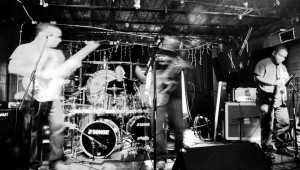 ‘Non-Linear Solution’ is again like some lost Van Der Graaf demo –  progressive music with a punk edge and a probing, inquisitive  saxophone pacing its way over changing rhythms transplanted decades later and played by Americans. The eerily haunting ‘Checkpoints and Borders’ that follows is the band’s most direct song on this album, with the vocals at their strongest it’s almost Krautrock sung by Jeff Buckley. Chunky guitar chord progressions and a wailing saxophone instrumental starts An Ends to a Means well then loses me as it meanders into 60s style political rally voice-overs and back beats; the melancholic melody of Riot Path coming as a pleasant change developing as it does into the more typically old school prog-driven work as it ascends to its climax.

A  Separate/Divide is intended to: “Explore the politics of division and seeks to expose our lack of unity and its consequences.” It may do that between band and listeners. Where it references the uneasiness of Van Der Graaf Generator (a band they’ve possibly not even heard of) I find it engaging and at times inspired, but other aspects, notably the weak vocals when used, holds back their creativity at the same time as preventing them reaching a potentially larger receptive audience.