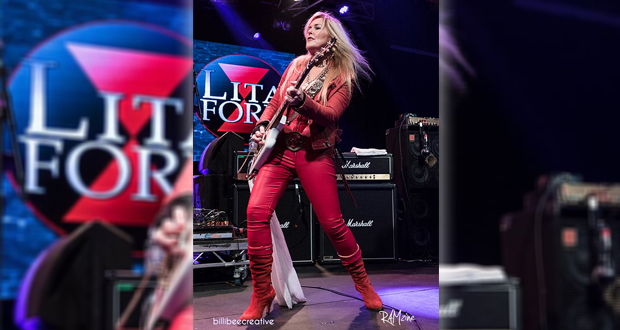 English-born American rock guitarist, vocalist and songwriter who was the lead guitarist for The Runaways in the late 70’s before embarking on a solo career in the 80’s, has finally paid us a visit in the UK for a brief tour. After nearly 30 years since she last visited the country of her birth, she’s now back and ready to bring a night of pure Hollywood rock ‘n roll to both Hard Rock Hell in North Wales and at the O2 Academy in London.

We don’t really know what took her so long but London rockers were obviously excited to see her since we were all standing in a very packed venue.

First band on is the support Rock Goddess for whom my expectations were not really high due to the fact that I have never been a proper fan nor an expert of their music. However from the first moment they got on stage I was absolutely blown away by their energy. This is a band comprising of three dynamic ladies, Jody Turner (guitar and vocals), Julie Turner, sister of Jody (drums) and Tracey Lamb (bass). This cool trio was part of what was termed the New Wave of British Heavy Metal music back in the 80’s. They have toured with the likes of Iron Maiden, Y&T and Def Leppard and they even performed at the Reading Festival back in 1982. Unfortunately after only three albums the band split up in 1987. Tonight they opened up with a few oldies like ‘Satisfied Then Crucified’ from their self titled album released in 1983 and followed by ‘God Be With You’ from their Hell Hath No Fury album. The band carried on with lots of interaction with the audience and they seemed to have a proper good time while delivering great music with the same passion as they used to do back in the day. Loud and quite powerful was the moment when the crowd shouted “Fuck Off” proudly, encouraged by the band during the rendition of “Back Off”. Among old and new songs, they finished off their set with ‘Heavy Metal Rock ‘n Roll’ which had most of us in the audience singing along to. Jody and Tracey didn’t stop for a second, they were moving around the stage and talking to their fans as if we were all a big group of mates at the local pub. The aggressive stage presence and the lovely and grateful personalities are probably some of the features I personally loved the most from them. Throughout the whole performance Tracey doesn’t seem to miss a note while Julie Turner is barely visible at the back of the stage behind her drum kit but like the other two puts in a great show.

Follows a slightly delayed Lita’s set, firstly introduced by a tape of ‘Balls To The Wall’ and then an audio track which plays her dad shouting at her for playing music. After that, Lita gets on stage looking great as usual and nearing 59, she still approaches a show as if she’s in her 20s, dressed in a snug one-piece red leather suit, whipping her long blonde hair and striking poses, talking about the rock lifestyle and firing riffs with metal machismo. She starts with ‘Gotta Let Go’ taken from her ’84 album Dancin’ On The Edge, straightaway it was pretty obvious that her vocals and playing were as impeccable as in the golden age. Her set perfectly shows the two sides of her personality, the one of the strong iron woman mixed with a reckless feminine sexiness which is often vocally expressed too. “You’re making me wet!” She says,”…in a good way.”

She then plays her cover of Elton John’s ‘The Bitch Is Back‘ which sounds quite different from the original, not sure if in a positive or less positive way. Without doubt, she sounds much better in her own repertoire, in fact she continues with ‘Playin’ With Fire’, ‘Relentless’ and ‘Living Like A Runaway’ which is introduced by a brief promotion of her memoir. She plays so hard that she keeps breaking strings throughout the set including the ones on the original guitar that she played during her time in The Runaways. Very powerful is ‘Back To The Cave’ followed by ‘Can’t Catch Me’ with an amazing drum solo from veteran Bobby Rock. ‘Falling In And Out of Love’ is introduced with a special dedication to Nikki Sixx, which I found quite emotional being such a Motley’s fan. During this particular song, her jam and harmony with lead guitarist Patrick Kennison (Union Underground, Heaven Below) gets better and better. After “Out For Blood” she finally announces that Runaways song everyone was waiting for, ‘Cherry Bomb‘, which she sang perfectly and with the same passion, strenght and powerful attitude of Cherie Currie. Most of the people in the audience, me included, had never had the chance to see The Runaways live so I am sure we all felt like we were in for a treat and Lita definitely gave us a taste of what once was one of the best girl bands ever existed.

She proceeds with the first song she wrote after leaving The Runaways ‘Out For Blood’ and then soften the atmosphere with her Ozzy Osbourne duet ‘Close My Eyes Forever’. Her lead guitarist Patrick plays a breathtaking Ozzy and the whole room is absolutely blown away. Deeply emotional and probably one of the main moments in which their talent and passion reaches its peak.

She concludes the set with her hit ‘Kiss Me Deadly’ and the audience goes crazy with the singing along and dancing around. A fantastic night which brought us back in time in the most positive way.

Lita’s brand of rock and roll is aggressive, raw and loose. These qualities mixed with a very talented band represent the winning formula for a successful performance. Let’s hope she won’t make us wait so long to come back again.