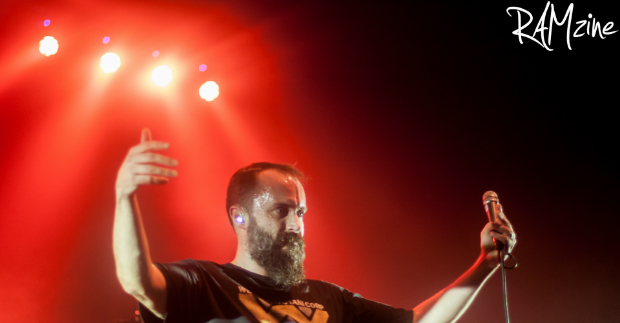 Maryland’s band Clutch have been touring across Europe recently, and stopped off in London last Saturday to deliver another of their animated and tight performances.

The lead singer Neil breaks the ice with an expression of amazement towards his crowd. “Holy cow” he shouts, as if he didn’t expect such a large turnout. In fact they had no choice but to book a new venue since Sheperd’s Bush Empire seems to be currently closed due to serious structural damage.

The O2 Academy in Brixton is filled with all kinds of people from different age groups and music backgrounds. Although Clutch may never fill a large arena, they definitely have the most dedicated fans. You can see them fully participating from the very start along the notes of ‘X-Ray Visions’ to the last two encores ‘DC Sound’ and ‘Earth Rocker’. Fallon introduces the whole band like an old jazz player but during the first few songs he keeps the interaction with the public to the minimum. Then we see him proceeding with the usual wild hand gestures which characterise most of his live performances. It’s like a mark of his profound connection with the lyrics, a tale that is being narrated, only in a louder and more raucous way.

Without any doubt Clutch sound even better live than on records, and really get the crowd pumped. They are the definition of a ‘live band’. Their music works best on the stage at this point in their career. They are much more entertaining than you would expect and every track is performed tightly. Neil Fallon also takes up his electric guitar for some songs and even plays the harmonica and the cowbell during ‘DC Sound‘. This is a band that has never been mainstream since their formation at the beginning of the 1990s but at the same time they never fail to keep their fans hanging on every note and that’s what fuels all their live gigs.

‘Son of Virginia‘, which closes the regular set before the two song encore, gets a particularly vehement response. Generally speaking it’s safe to say that the bar was already set high when they released their last album but they met and exceeded all expectations. In a way their fans don’t want their successful formula to change. Guitarist Tim Sult’s blues riffs and Neil Fallon’s scruffy bark will always be their distinguishing feature. Once you get addicted to their blues-inspired hard rock you will be glad to stay a part of their elite followers.

Clutch were supported by hard rockers BOMBUS and rock and rollers Greenleaf.