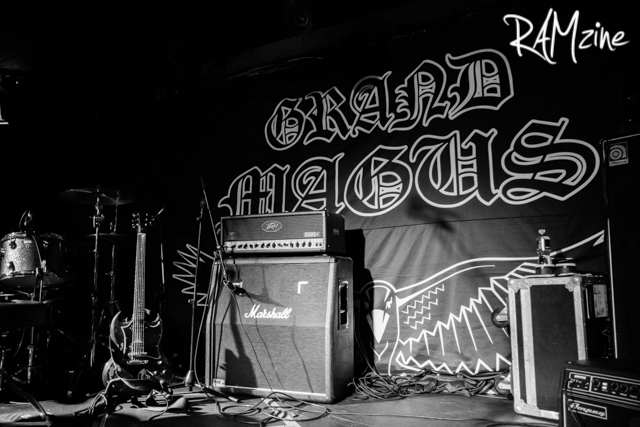 British shores have a history of Viking invasions, thankfully these days they are more than welcome, and the current assault across the nation had Swedish legends Grand Magus pillaging their way through venue after venue on the Frost and Fire Tour.

As they prepare to take the Capital in their final show, we are treated to an insane showcase of talent and tunes, started off by none other than the new boys that’ll soon be making a name for themselves, Blind River. Taking to an extremely busy stage, they have little room for movement but manage to make the most of it. Those that have been smart enough to arrive early were in for a hell of a show as the band blast through around seven tracks of blues driven, 70’s inspired rock. Looking a little closer, those that are fans of the live music scene might be able to make out a few familiar faces are on the stage, as it turns out Blind River consist of members from Pig Iron and Godsized. Bands themselves that need little to no introduction. Despite having absolutely nothing recorded or released, they seem to get the crowd instantly eating out the palm of their hand and craving for more. If you are looking for a new band worth checking out live, these are most definitely a must!

Almost begrudgingly, their set is over and it is time to make room for the next band. Joining Grand Magus as the main tour support were Planet of Zeus, coming from Athens, they brought what sounded like half of the city with them such was the reception they received from the crowd as they took to the stage. They’ve made a great name for themselves through their years and waste no time in showing how they did it. Sounding larger than life, the venue struggled to hold them but it didn’t stop the good times coming, and this clearly showed on the bands faces as much as the crowds. Much like all good times though, the time flew past and their 45 minutes on the stage felt more like 4 or 5 minutes.

With two bands down and just the headliners left, the stage finally showed some room for movement with all the musical equipment removed. Soon up were Grand Magus, and with a crowd brimming with excitement and energy from the previous two phenomenal acts, you’d think they had their work cut out for them to top the night. These are Vikings though, and they don’t give up. With JB taking to the stage to set up and share some humorous moments between him and the crowd, they soon were ready for battle, and they really came to conquer. With an hour and a half to play, and such a great back catalogue, it must be tough to nail the perfect set, but if ever there was one, they played it. Hammering through tracks spanning their career, they proved that they still have that thirst for it. With sounded better than ever, Grand Magus really were hard pressed to be heard over the crowd, and the crowd really did not want them to ever finish. It was safe to say that everyone seemed to be a Viking that night, and the chilling, rapturous singing of the crowd to the ever impressive set closer ‘Hammer of the North’ will no doubt make the show a lasting memory for the band too.