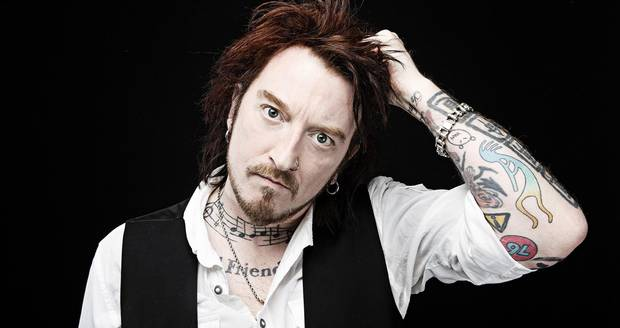 Falling down a flight of stairs clutching a bottle of Jack Daniels and dreaming about a band that combines the riffs of Metallica with the melody of Cheap Trick is where we start Ginger Wildheart’s Songs and Words tour.  The mastermind behind some of the best alternative rock this country has ever produced, had just been sacked from The Quireboys and thankfully picked himself off the ground and went on to create that very band.

Mr. Wildheart then goes on to tell the story of his career, using the albums he has released and short medleys of songs from them as a basic structure.  However, if what you are looking for is a strict narrative, then this is not the show for you.  Ginger goes off topic and circles around the point more times than I can count, however, that just makes it all the more brilliant.  Because if there is a man who has more than a few stories to tell, it is this one.

Whether it’s waking up in a Thai prison, coming face to face with a very angry monkey or buying a horse, Ginger knows how to spin a yarn and he seems just as comfortable chatting into a microphone as he does singing into it.  He can also probably lay claim to being the first person to try and start a fight with the smoke machine of the Eastwood Park Theatre, for making too much noise.

When the songs come around it is still hard to argue with them.  The man has a back catalogue to die for and whether it’s The Wildhearts or Howling Willie Cunt, they all sound fantastic in their stripped back acoustic state.  He’s joined on stage by Jase Edwards (Wolfsbane) who wonderfully compliments Ginger on every track and while the audience seems unsure as to whether this is an occasion where they supposed to sing along or not, it doesn’t stop those songs being as perfect as they’ve always been.

The real highlight of the night though is the fact that this feels like a family. Ginger isn’t standing on the stage preaching to the crowd or twisting history to serve his own purpose.  No, he is honest about his mistakes, as much as he is his triumphs and the fans in attendance are on the whole respectful of both sides of the coin.  When he ends his set by talking about the impact Pledge Music and the fans funding his work has had, there are more than a few people in attendance wiping away tears and as Ginger sings ‘Lover it will all Work Out’ to his wife, it’s a genuinely beautiful moment.  The Wildhearts probably should be one of the biggest bands we’ve ever had and while things may not have worked out that way, Ginger shows on nights like tonight why his fans have followed him through all these years, the man is just that damn good.