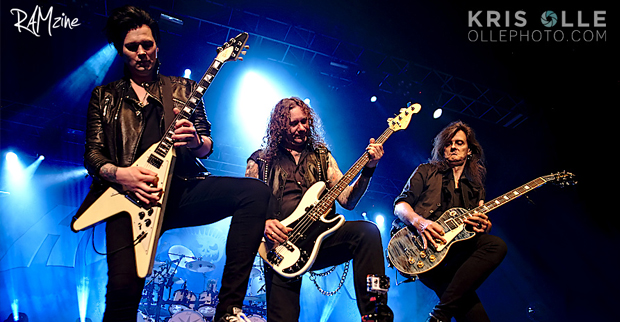 Is there life in the old Pumpkin? “Fuck yeah!”

We went to celebrate German power-metal and re-live a bit of music history.

We arrived early to the old and battered building of the O2 Forum is Kentish town. There were a pair of ticket sharks lingering around the box office trying to lure people to buy/sell tickets with not much success. On the left side of the building I could see a medium size queue building from the fans who came early.
Getting into the venue was straight forward. From the dated front doors opens the entrance hall through which you get to the upper auditorium. The floor of the upper auditorium is slightly lifted and leads to the middle auditorium. There is a bar on both sides in case anyone would get thirsty (I will not comment on prices). I asked for a Lemmy on the right and got raised eyebrows and questioning stares from the decorative barmaids, so I explained.
From the middle auditorium you can get down to the lower auditorium, the area in front of the stage. You can also go up to the balcony. Everything is designed to give you a good viewing angle of the stage. The internals are painted to blue with the occasional Roman inspired gold décor.

COP UK started the night. Their stage presence and moves were very good and generally projected the image of the well established band. They started with their heavier faster tunes following by their latest material that focuses more on slower melodic ballads. Unfortunately slower tunes tend to bring the energy levels down and get the audience a bit sleepy. By the end of their set the place got around 60-70% occupied. All in all it was a good start to the night.

Next up were Rage. Rage had been founded in the same year as Helloween so they have been on the block for while. Their current lineup was announced last year. The line-up includes Peavy (the head demon and founding member) on vocals, and two youngsters who have grown up on Rage’s music: Marcos on guitar and Vassilios on drums. I felt lucky to see these iconic German power metal bands sharing same stage.

The Rage set was high energy and powerful. They have radiated happiness and gratefulness and lifted the atmosphere to a new level. It was clear that they enjoyed every second of their performance. They pulled out all the stops, including Marcos playing the guitar with his teeth. They had a nice bit of sing along to Higher than the Sky at the end and finished on a high. 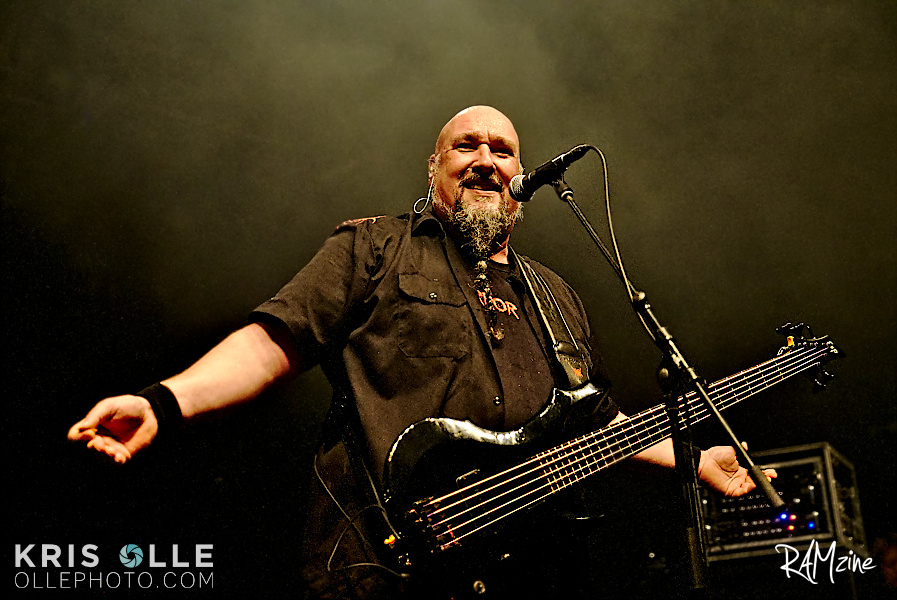 After the thunderous performance of Rage, roadies swarm on stage to configure the multi-level setup for Helloween. A backdrop was unveiled, lights were deployed and a massive pumpkin head was inflated. The arena slowly filled up with people to a good level but you can still easily navigate in the crowd. 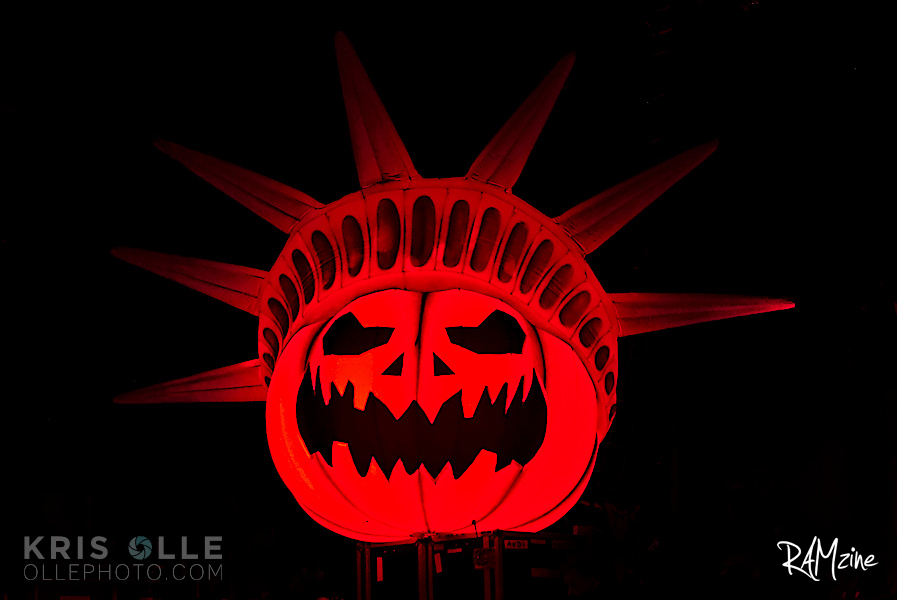 Helloween are celebrating 30 years on the road, they have been through a few lineup changes but still going strong. The lineup has the two founding members Michael Weikath lead & rhythm guitar, Markus Grosskopf bass. The rest of the team has been together for about 10 years. Andi Deris lead vocals, Sascha Gerstner lead & rhythm guitar, backing vocals and Daniel Loble drums. The European tour started last year in support of the My God Given Right album. 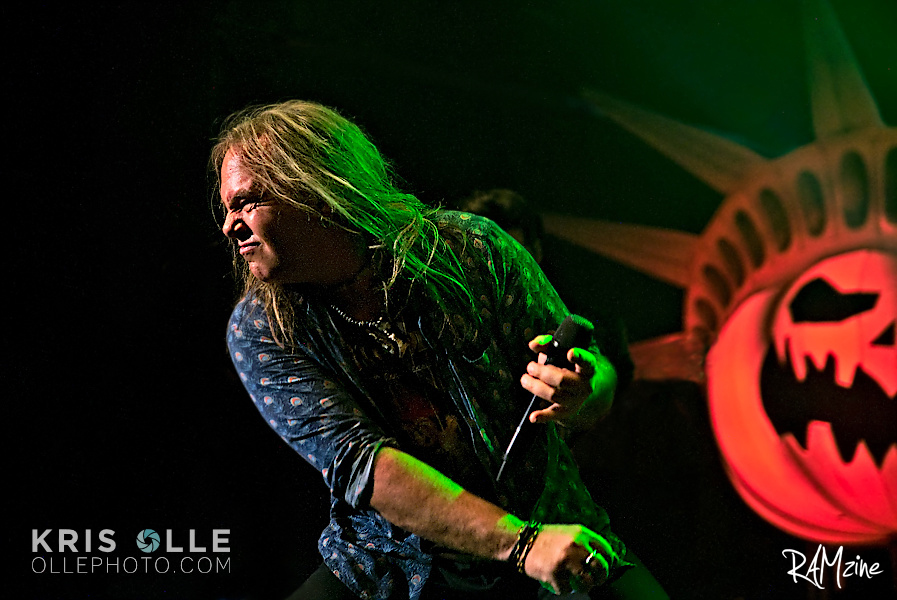 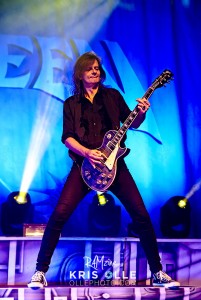 After the stage changes completed, the band appeared to the initial bars of ‘Walls of Jericho’ and transitioned to ‘Eagle Fly’ followed by ‘Dr.Stein‘. After that, Andi introduced the latest album and continued with the title tune ‘My God Given Right’ that transitioned into a lengthy sing along.

It was clearly visible that they knew what the audience wanted and didn’t hesitate to deliver the experience; it was also obvious that they have been doing this for a while. With a back catalogue like Halloween has, there are plenty of songs to build a killer list from.

Their set was designed to please old and new fans with songs from the past and songs from the latest album such as ‘Lost in America’. The show was closed with a medley (with lots of sing along) of ‘Halloween’/’Sole Survivor’/’I Can’/’Are You Metal?’/’Keeper of the Seven Keys’. Sascha kept playing the main riff of ‘Keeper of the Seven Keys’ while they all left the stage one by one bowing to the crowd.
Of course, no-one wanted to leave and crowd chanted “Halloween” until they came back with a smashing encore in the form of ‘Before the War’, ‘Future World’ and ‘I Want Out’!
All in all, we can safely say that we got what we came for!
[box type=”shadow” ]Helloween Set List: Walls of Jericho Eagle fly free (1988) Dr. Stein (1988) My God given right Steel tormentor (1996) Mr. Torture (2000) Waiting for the thunder (2013) Straight out of hell (2013) Heroes (2015) Drum solo Where the rain grows (1994) Lost in America (2015) Power (1996) Forever and one (1996) Medley (Halloween/Sole survivor/I can/Are you metal?/Keeper of the seven keys) Before the war (Encore) Future world (Encore) I want out (Encore)[/box]
I created a spotify playlist here if you want to listen to the tunes.