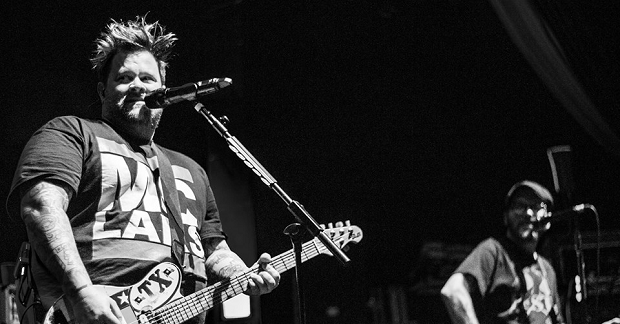 If you don’t remember Bowling For Soup the first time around, they came to attention in the surreal punk-pop revival in the late 90s/early 00s along with Blink 182, New Found Glory and Good Charlotte. The good news is a lot of these bands are still around  (NFG,Jimmy Eat World) and for some it has been a bit of a bit of a bumpy ride (GC, Blink) whereas BFS have somehow landed in the middle and stayed consistently popular despite not being on a record label, personal issues and countless side-projects.

In 2013 the Texans announced a ‘farewell UK’ tour, which we now know was more of a ‘see ya later’ than ‘goodbye’. Previous to this BFS managed to sell out British venues year after year regardless of their height of chart success being in 2002. Naturally their fans are back out in full force: from fans of their classics, to youngsters who have discovered them through  love for rock ‘n roll. Without an album to promote it’s pretty clear we are all here to have fun, including the guys on stage.

Long-time BFS tour buddy MC Lars  is tonight’s compare, and is sporting an eye-cathing neck-chain complete with a Zelda NES cartridge. Lars also performs a few of his ‘hits’ from over the years including ‘Download This Song’ which doesn’t feature Jaret Reddick on stage. I wonder if he knows he is in the head-lining band? The MC also improvises a freestyle rap around random objects the crowd are holding up. Really entertaining, maybe more gigs should have compares.

The opening act for tonight’s festivities are Nottingham quartet Lacey. Not the first name that comes to mind when you think of a Bowling For Soup comeback tour but they certainly have penchant for all things post-hardcore. Think of a British version of Taking Back Sunday and you’re almost there.  BFS UK tours are known for pushing young talent and yet again they have done a great job of introducing their audience to something a little different. It’s clear they know the BFS crowd aren’t their core audience but a cover of Blink 182’s ‘Dammit’ really wins them over. No doubt we will see more of Lacey in the future.

In the best way possible: It wouldn’t be a BFS UK tour without either The Dollyrots or Patent Pending on the support bill. Luckily Kelly Ogden and co are back after a 3 year break. Like the head-liners, you know what you are going to get with Dollyrots –  punk rock action served with a bucket-load of fun. New drummer Rikki Styxx adds an extra helping of girl power to the band as well as some thumping beats.

All the old favourites are here ‘My Best Friend’s Hot’, ‘Get Weird’,etc. Along with a song front-woman Kelly announce as “A song about farming equipment here” What could it be? “To everyone else it’s about sex” . After the first few lines it sounds like ‘Combine Harvester’ by The Wurzels. Is this about sex? Surely not! It’s actually a cover of the original ‘Brand New Key’ done in pure punk style. We also get to hear a new(er) track ‘Save Me’ live showing we still have a lot more rock ‘n roll rebellion to come.

Ending with ‘Because I’m Awesome’ – this was great return for Kelly and Luis (along with Rikki).  Although this set is very fulfilling, it would be better to see The Dollrots do a longer show – possibly on one of their headlining gigs. Never the less this is all a Dollyrots or BFS fan could ask for.

After another turn from MC Lars, BFS’ set is revealed to include their famous on-stage-bar ‘Ye Olde Soup Inn’ and beer barrells labelled ‘Delicious Gary’. This is going to pick up where they left off, you can tell. This tour is titled ‘How About Another Round’ after all. We see the familiar ‘Texas’ flagged guitar, surrounded by the same four people we have been listening to for the past two decades- Bowling For Soup are back – and they brought beer!

Starting off strong with classic single ‘The Bitch Song’ the audience are already having the time of your life. Some may have only heard one or two Bowling For Soup tracks, others none at all, but to everyone here this is like a ‘hit-after-hit’ setlist: ‘Ohio (Come Back To Texas)’ followed by ‘Emily’, this is a BFS’ fan’s dream come true. It’s a bit of a cliche to say this, but BFS know how to please their fans: They know which songs will bring a smile to the most hardcore ‘Souper’ as well as the casual listener who might go to these gigs ‘for a laugh’.

Like other bands who express their sense-of-humour through song, there was quite a lot of mid-song banter along the way, including a bar stop in the middle of ‘Punk Rock 101’, with members of the support acts, as well as  bassist Erik Chandler’s famous KISS impressions. Even so front-man Jaret  Reddick is rather frank with his fans explaining it was a personal decision to take a break from touring and thanks his band mates for sticking with him. The gig takes a shift in gear as Reddick also announces someone handed him a card thanking the band as ‘Turbulence’ was played at her 13-year-old son’s funeral. Showing the band also have a sensitive side, as well as a silly one.

Back in to hits ‘1985’ and the theme from Phineas and Ferb (‘Today Is Gonna Be a Great Day’) in to another poignant moment: Jaret mentions some people say ‘punk-pop is dead’ and he feels it’s BFS’ duty to keep it alive. What better way to do a medley of Blink 182’s ‘All The Small Things’, Green Day’s ‘Basket Case’, ‘Girls and Boys’ by Good Charlotte, ‘The Middle’ by Jimmy Eat World and ‘My Friends Over You’ by New Found Glory? Right? Confusing casual listeners even more – they do their traditional cover of ‘Stacey’s Mom’. Again showing this band know how to laugh at themselves. Pop-punk will never die.

The Dollyrots come back on stage for the treat that is a duet between their two lead singers on ‘Love Ya, Love Ya, Love Ya’ Showing their fellow rock musicians mean as much to them as their fans do. Ironically, the band end this section of the show with two songs The Dollyrots covered on their split EP (‘Almost’ and ‘High School Never Ends’). As the four pop-punk veterans step off stage for the first time, the crowd are still hungry for more, even after the banquet served. There’s one track everyone loves hearing live from this band: ‘Girl All The Bad Guys Want’. Ok, the lyrics “I’m watcghing/creamin’ over tough guys/listening to rap-metal/turntables in her eyes” might sound a little odd in 2016, it sounds just as awesome today as it did in 2002.

It’s great to see BFS back for ‘another round’ and if they are as fun and exciting as this – I’d be up for many, many more in the future. Hopefully their new material will capture the spirit of the Bowling For Soup we saw here tonight. Maybe taking a break was a good thing if it produces a ‘comeback’ like this.

All photos by Sarah F Martin. Check out her other work on her official Facebook page: