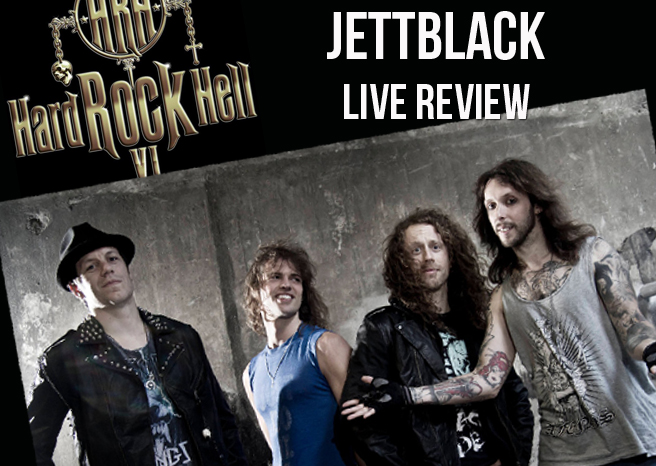 With frontman Will Stapleton away on the War of the Worlds tour, many thought JettBlack may pull out of Hard Rock Hell 2012. However, they stuck to their guns and enlisted the help of Liam Lever to fill in for Will for this show. What a sterling job they did.

Launching into opening number “Get Your Hands Dirty”, JettBlack showed why they are one of the best young bands around today. The sheer energy exuding from bassist Tom Wright as he commanded the crowd from his side of the stage, and guitarist/vocalist Jon Dow as he did a fantastic job singing all of their songs was just fantastic.

However, the last three songs really got the crowd moving. “Prison of Love” went down brilliantly with its sing-a-long chorus and “Two Hot Girls” dripped with rock and roll swagger and attitude. The real highlight was saved for the closing number “Raining Rock”, where Hayley and Amy from Nympherno came on stage with the band and breathed fire in time with the music. This was a fantastic finale and offered a live vision of JettBlack’s “Raining Rock” album cover.

JettBlack are certainly a band to watch for the future. Watch out for the band rising higher and higher as we enter 2013.