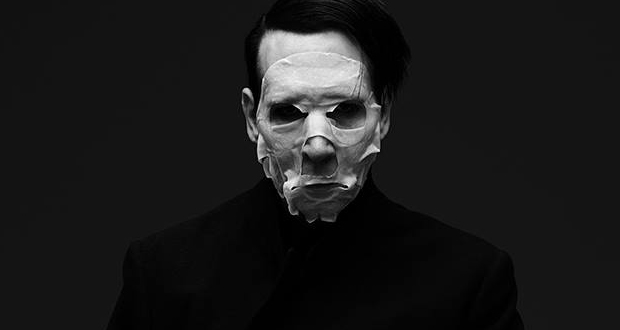 Surprisingly enough Marilyn Manson went ahead with his London show, last Thursday, after cancelling his Paris date due to the latest terrorist attacks. There is a Parisian tribute of red, white and blue lights before he arrives and a voice narrating an old tale introduces the goth star. The show is filled with dark vibes and the same energy that has accompanied ‘The Reverend’ since the very start of his career.

He makes several outfit changes throughout the show starting from the classic long black coat and boots to a gangster kind of look when performing ‘mOBSCENE‘, then a circus freak on stilts during ‘Sweet Dreams‘. ‘Antichrist Superstar’ was theatrically performed from his Hitler podium while we watch Manson holding a flaming bible. An image that wasn’t totally unexpected at the eyes of the thousands of fans who follow him since his debut years. Manson hasn’t lost his controversial side, he still kicks over everything in sight and the roadies are constantly fixing the damage and tidying-up.

In a coherent style he also performs some of the songs with a customised microphone that has a huge knife attached at the end of it. Just before going ahead with ‘No Reflection’ he has a go at someone in the crowd for throwing a plastic glass on stage. “Throw your bras, don’t throw your cups, because A: I’ll drink it, and B: I’ll come out there and bite your liver out.” Everyone applauds Manson’s speech but he warns us all “Don’t cheer over my mental illness” implying he is not playing around.

He is still the King of Darkness after all. He also shows a soft side when we spot him hugging Twiggy (bass guitar) several times during the gig, as a demonstration that they still have a genuine bond despite the old fracture. And ultimately, when he lights a candle as a peaceful symbol and says “I wanna thank you all for coming tonight”.

The ending is quite unusual too, he performs ‘Coma White’ and then leaves the stage without a word. It’s like mystery and shock will leave the stage for the night, but actually they will never leave Manson’s persona.