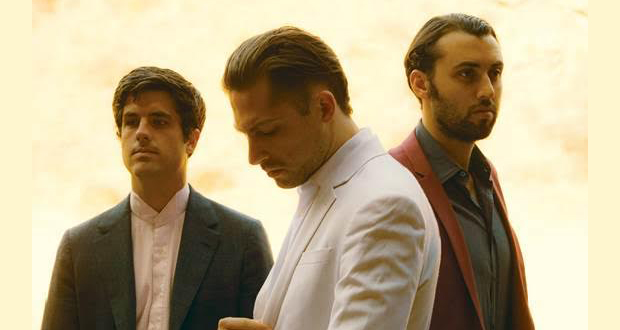 What would it sound like if Queens of the Stone Age bassist Micheal Shuman picked up some drum sticks, a guitar and a microphone? The answer: Mini Mansions. And what would it look like? Well… pretty damn sleek. On keys Tyler Parkford sports a classic black tux, Shuman wears a 007 style all-white number and guitarist Zach Dawes dons a rather fetching floral two-piece.

The LA trio’s set is rammed with synthed-up, hard-edged tunes which have the crowd divided between jumping, dancing and head-banging. Mini Mansions released their second album ‘The Great Pretenders’ earlier this year, an amped-up version of their debut with loads of heavy beats, distorted riffs and radio-friendly psychedelic vocal hooks. The unconventional structures and unpredictable tracks keep the audience alert and tonight the  crowd is active in movement.

Following their Reading and Leeds performances Mini Mansions have announced 4 UK dates this November. You will be able to catch them at the following locations:

Read more of our Reading Festival 2015 Highlights in issue 5 of RAMzine:

Victoria Bundy
Hey I’m Victoria- a Fine Art graduate with big love for live music, photography and all things creative. You’ll mostly find me running around somewhere in front of the stage with a camera in hand.