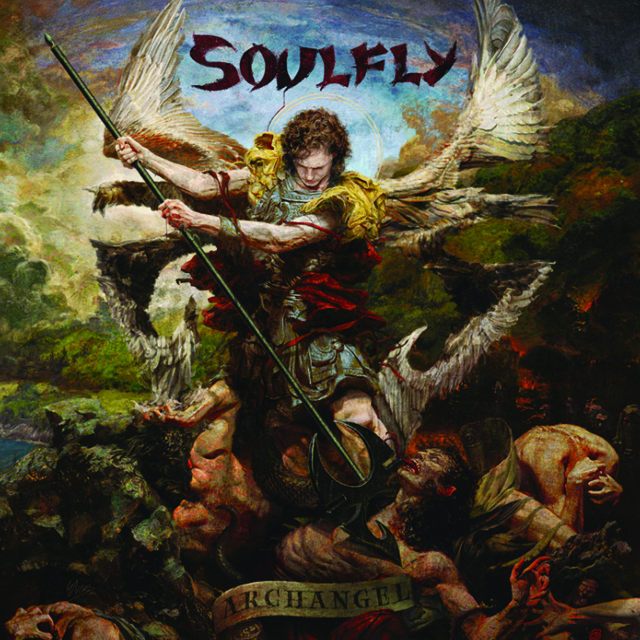 It’s not easy being a SoulFly fan. Numerous members of the band have been and gone since the band formed in 1997, the latest being bassist Tony Campos who left to join Fear Factory earlier in the year. However, the positive is that fans have been treated to 4 new LP’s in 5 years, and there’s no such thing as a too much SoulFly. Is there?
This is the bands tenth studio outing and it I’m pleased to say that ‘Archangel’, for the most part, delivers more Latino metal goodness!
In early interviews, founding member and singer, Max Cavalera said that “fans would hear a heavier side to the band”. He wasn’t wrong.

The album kicks off with ‘We sold Our Souls To Metal’. This song can only be described as a wall of sound. Its fast, its mean and in true SoulFly fashion its aggressive! This song sets the tone for the album very well.
SoulFly are also known for the brutality of their music and songs such as ‘Sodomisers’ (featuring Todd Jones from Nails) and ‘Deceiver’ do not disappoint. ‘Shamash’ is a return to the popular “tribal sound” the band are known for and will certainly be a crowd favourite when coming to play live.
‘Mother of Dragons’ is another high point on the album. Its showcases the versatility of the band, adding harmonies and the Arabian sounding guitar solo. SoulFly have never been a band to stick to one sound and we are thankful that this continues with this outing.

‘Archangel’ is pure metal. Heavy metal. Its lyrical tones very interesting too. Lased with historical storytelling, which is made better with the standard SoulFly metallic groove. It works well.

Unfortunately with the positives, come some negatives. Cavalera’s high pitched scream at the start of ‘Live Life Hard’ leaves a lot to be desired. Which is a shame because the rest of the song is very well done. ‘Ishtar Rising’, while starting strong gets a bit bland toward the end.
While not a make or break, the album clocks in at just over 35mins. Compared to the previous album Savages which was around the hour mark.
Verdict: They have their sound, why would they need to change it?  Going by the rate that previous albums have been released, I look forward to album 11, by Christmas. A guy can dream right?