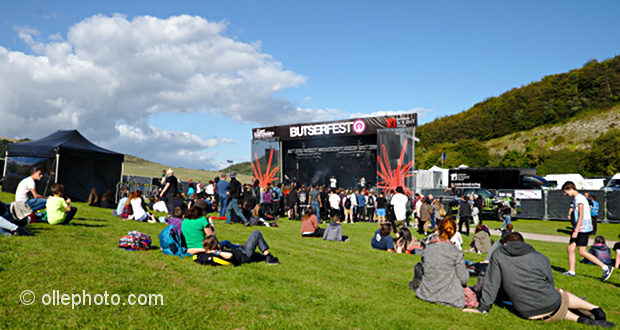 I should have known that this was more of a youth event; what person in their right mind would choose to go to an outdoor music festival at which one cannot have a nice cold lager? Don’t get me wrong, I am not one to get tanked up and fighty, but I do enjoy a pint or two. Of course, the problem lies with those that do not know their limits; those that cannot control themselves and spoil it for others. But it seems this festival is not about that.

Now, although lacking in authentic rock & metal festival spirit – and by authentic, I mean dirty and debauched – it seems to me that this is an important event. For the most part, the festival goers seemed to be aged from 12-20, and the event is certainly aimed towards that demographic; there were various stalls relating to sexual health, careers and support, one offering free chlamydia testing. “Free” somehow makes anything more appealing, and even I felt as though I were missing out on something. There was a good number of inflatable entertainment activities – e.g, a gladiator style battle podium, a very popular Total Wipeout style sweeper – all free to use. 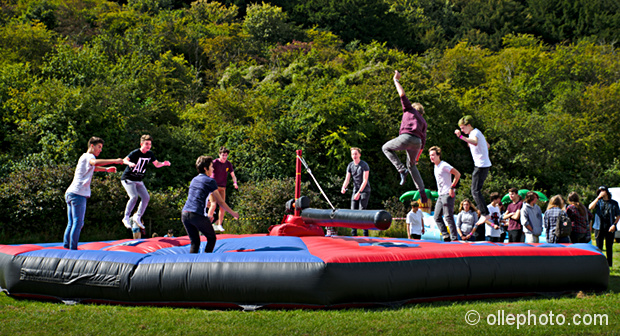 My last festival being the mighty Download festival, I found the scale of Butserfest is somewhat underwhelming; however, when considering this is an alcohol free youth festival, it is a remarkable achievement to have the likes of Hacktivist, Funeral For A Friend and Don Broco playing. Nestled in a valley in the Queen Elizabeth Country Park, Petersfield, the setting is fantastic.

Speaking with the proprietor of Victory Snack Bar, Spike, I get an idea for how important the sponsors are for this event. He explained how successful the event has been in past years and that he has never known a more pleasant and polite crowd of people. Slightly unnerved by the distinct absence of a crowd at the time, he told me that the event usually pulls around 1500 – 2000 people; however, people gradually trickled in and, before long, his team beckoned for his assistance as the queue started to build.

Having scoped out all the bands, and based on what I saw at Download earlier this year, I had my plan in hand; I was looking forward to acts such as Hacktivist, The Qemists, Lounge Kittens, Zoax, The One Hundred and Vanity Draws Blood – Zoax (frontman Adam Carroll below) and Vanity Draws Blood being at the top of the list. 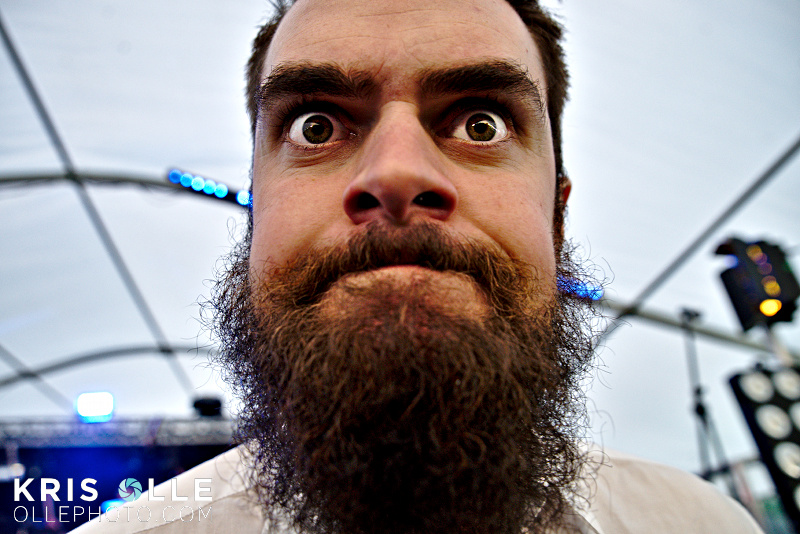 Starting about fifteen minutes late, sadly, Vanity Draws Blood offered nothing remarkable, which I found surprising as their recorded material really stood out when I was checking out all the bands. My attention was first grabbed by Cardinal Bay, who sounded even better live than they do recorded – of course, this is as much about the people in the background and the set up as it is about the band. They delivered a tight set and even got a miniature mosh pit going, which was quietly amusing considering the size of the crowd at the time.

Demonstrating that it is not solely the set up and staff that make a good show, Boston Manor had a messy sound and were not very active on the stage, making for a rather bland performance. Similarly, the sound check for Our Hollow Our Home did not bode well; piercing guitars and muddy bass made for a poor sound – it is moments like this that demonstrate the importance of a band carefully considering their overall live sound.

Tiring of the aural assault from the main stage, I took a walk around the site and strolled past the Introducing stage to be captured by the mellow, bluesy style of Ella Davidson. The simple style of the music complemented her fantastic voice – she was a welcome break from the otherwise heavy music dominating the event.

Of course, Ella Davidson was not the only melodious mademoiselle to regale the Butserfest crowd; The Lounge Kittens delivered three thoroughly entertaining 15-minute sets on the main stage. Between The Lounge Kittens’s sets, The One Hundred (pic below) unleashed their crushing set to an audience that needed no encouragement to get a mosh pit started; they are a fantastic band to see live and were no less impressive at Bustserfest than they were at Download. 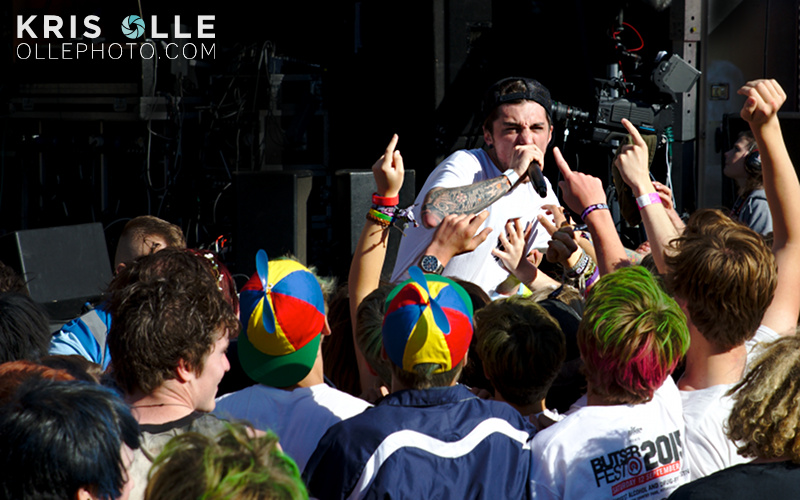 Both The Qemists (pic below) and Hacktivist played highly energetic sets, the latter let down initially by a very muddy mix. The sound was sorted as the set progressed and, as the music gained clarity, the show became much more enjoyable. 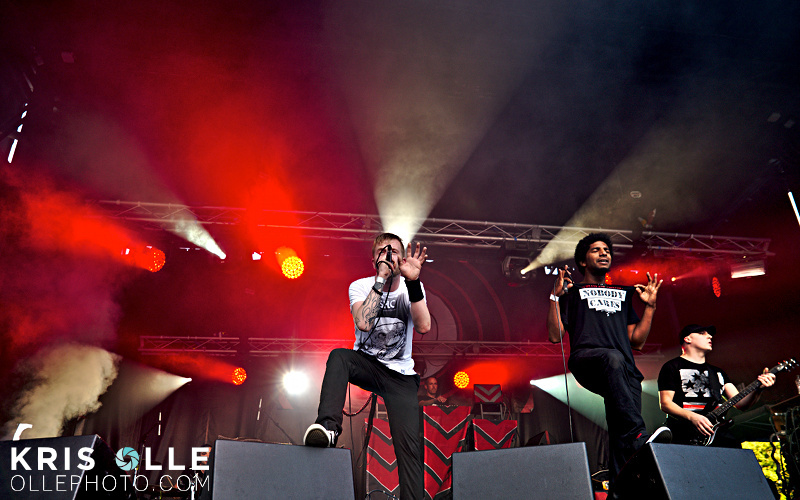 Funeral For A Friend came on to prove why they are such a successful band; not historically a fan of the group, even I found myself really enjoying their live performance – the sound was fantastic and their delivery flawless. 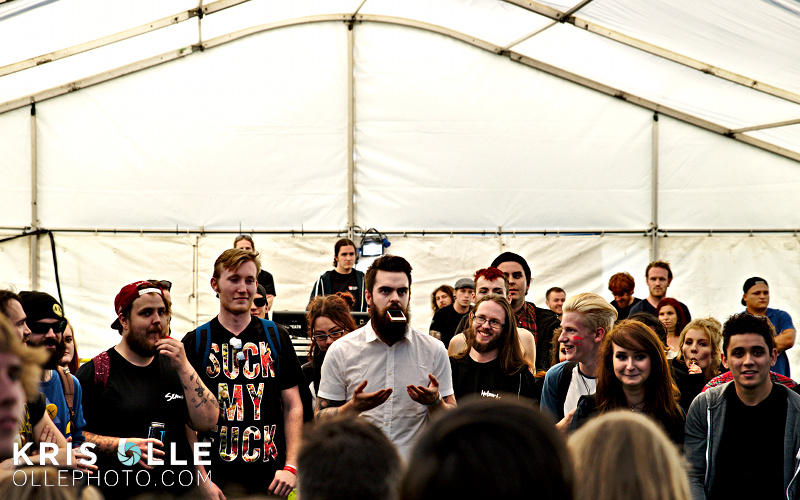 For me, the highlight of the day was ZOAX (Pictures above and below). They were absolutely fantastic in every way; the music was superb, the performance energetic and authentic. From the offset, I was captured by the odd bidding of “Merry Christmas” from the frontman Adam Carroll: joker, I thought. Little did I know. He drew the relatively small crowd closer to the stage for the start of their set, kicking off with “Is Everybody Listening.”  Straight away, the quality of this band as a live entity was clear and, before they had even finished the first track, I was convinced they should have been playing the main stage. That was before Adam, jumped into the crowd, playfully getting in people’s faces and borrowing hats from audience members. People continued to show up, amusingly unaware of what was going on. Having stayed in the crowd for half of the set, he made his way back to the stage, but not before walking away from the stage and tent, to accost the people on the ‘sweeper’, chastising them for not being in the tent watching the show. Throughout the performance, the nervousness of the security staff was palpable. Towards the end, Carroll came out into the crowd again and had everyone sit as he performed acoustically. This band is phenomenal, and they are playing at Breakout Festival in Brighton on September 26th, get there if you can! 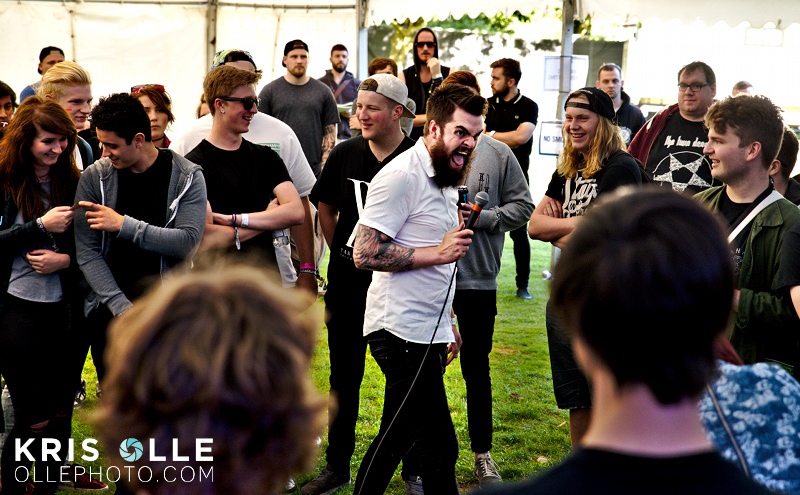 All in all, Butserfest was a great event, drawing about 1500 people. Although it is clearly for the younger crowd, it is a superb offering that allows young people to have fun in a safe and friendly atmosphere. You could even bring your grandparents along… so long as they can bear the occasional f-bomb. Okay, so fairly frequent f-bombing. Anyway, I got the impression that this really is more about providing an event for the youth than it is about profit, and in that respect, huge credit goes to the organisers, staff, sponsors and, of course, the bands, some of whom are probably used to playing to much bigger crowds.

Tickets for Butserfest 2016 are already on sale at www.butserfest.co.uk/tickets, and until midnight on September 22nd, you can pick one up for the bargain price of £10. Perhaps I’ll see you there next year…