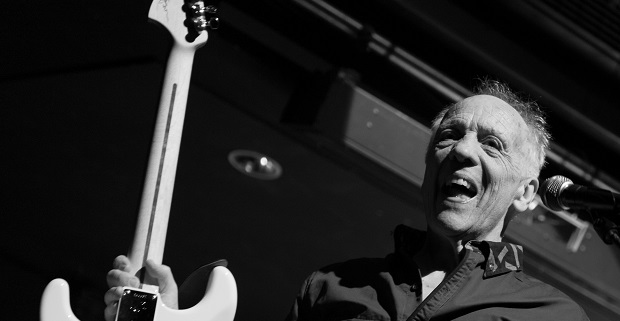 The word ‘legend’ is overused at times in the press to describe fairly recent acts. Well think of it this way: Have they been compared to Hendrix? Have they worked with some of the world’s most respected musicians? Are they still releasing albums at the age of 70? probably not. Robin Trower could say ‘yes’ to all of these.

Gateshead’s premier venue The Sage is celebrating it’s 10th anniversary this year and it is a true testament to them for hosting gigs such as this. The hall is packed out with fans Trower has picked up over his 50 years in the music industry.  To  my surprise Joanne Shaw Taylor is the support act, merely months after her headline show at this very venue. After being discovered by North East native Dave Stewart, the guitarist and vocalist has gone strength – to – strength in the past six years.

Taylor is in the same class as other blues-rock guitarists showing real talent that a lot of so called ‘musicians’ fail to in this day and age. Quite a youngster in this genre at the age of 28, Taylor is one to watch. This could of easily been a double-bill as the Birmingham girl gets a very warm reception from what essentially are Trower’s fans.

Although Trower himself is from  London, he has a great relationship with the North East – he has recorded three albums with local icon Bryan Ferry and regularly toured in this neck of the woods. The Gateshead crowd  are anticipating an equally entertaining show to match the support from Taylor.

Trower has a new studio album AND a new live album out this year – plus has released almost 30 other LPs so there is a lot of ground to cover tonight. In the grand scheme of things a gig by a guitar maestro such as Robin isn’t about the ‘songs’ as such – it’s about seeing a true legend work his magic, play the blues.

Tracks such as ‘Daydream’ and ‘Lady Love’ show why Robin sells out these kind of venues he is one of the few masters of the craft of blues guitar.  You can see by Trower’s face the guitar is his true love. The band exit momentarily and return for a much anticipated encore. Robin thanks us for attending this gig, no response is need as he is met with overpowering cheers after the last song ‘For Earth Below’.

Often called ‘The British Hendrix’, which I think is an unfair label. Why? Trower is his own artist and will be remembered for other reasons. Although our headline act is in his later years, he has plenty of fight left in him and I’m sure this is not the last time we will see Robin Trower.