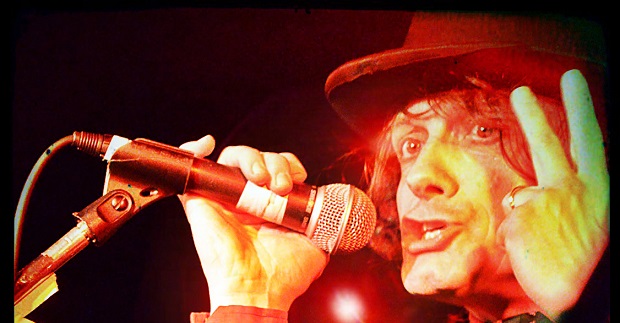 The Last Great Dreamers were formed by Marc Valentine (vocals and guitar) way-way back. He met Ginge (drums) & Joolz Starr (bass) and then, finally, Slyder (guitar and voice) through an advertisement that he had put in the Kerrang! magazine. We are talking about the 1980’s.

Dogs D’Amour and Hanoi Rocks were early influences — clearly evident, not only in their first look and style, but also their numbers.

Originally named Silver Hearts, they almost became the ‘house band’ at the famous Marquee Club in London in the early 1990’s — packing out the house every week. But the glam and sleaze revolution was fading and grunge had started to take over. At around about this time, perhaps in tune with the mood of the industry, the Silver Hearts decided to change their name to the Last Great Dreamers.

Following this, the LGD entered their ‘golden age’. The band were named best new band in Kerrang! Awards (1995/6) to become runner up to Skunk Anansie. They also gigged with Phantom Blue & Dogs D’Amour and headlined their own tour.

Fast-forward to 2015 and Britain’s finest rock-dandies have re-convened (almost to a man) and have managed to competently regenerate – to become once more – a cohesive musical force. They re-released their best album – Retrosexual ( as a 21st Anniversary re-mastered edition) – and they have been out on tour with the former Runaway’s singer Cherie Currie.

We caught up with the band at their show at the Underworld venue – London, 18 November. On a stage that they shared (back in the day) with the likes of Suzi Quatro. Incredibly (and coincidentally) she was backstage to watch the performance.

The show started with the surprisingly agile and effective ‘Crash Landing’ which had those incomparable, distinctive vocals from Marc, and some fine guitar riffs that were masterfully formed by Slyder.

Beat-pop influences were also evident on ‘Lunacy Lady’ taken (as well) from their ‘Crash Landing’ album.

‘Far From Home’ from the Retrosexual LP was a strutting pomp-fest. With plenty of woo-woos, electric twangs and some pleasantly coquettish lead vocals. But the best thing about this song was the noisy stomp produced by Ian Scruffykid on bass and Denley Slade on drums.

New song ‘Dope School’ was a simmering, smuttering melt-down of guitars and punk attitude. The vocals were spat out with shabby / dirty ease and they were even a little bit angry at times. This was an easy song to like, despite the disreputable smile upon its face.

Last Great Dreamers are back and it is nice to see how eager and energetic they are. We look forward to a new album (promised for early next year.) And if you like Mott the Hoople or Manic Street Preachers, you’re sure to love these musicians.

They are properly indestructible. And incredibly talented.

All photos by Neil Mach